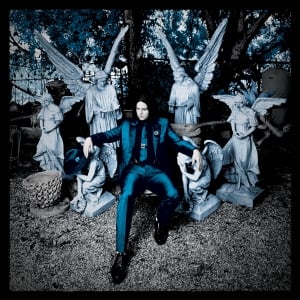 [xrr rating=3.75/5]Jack White is rock ‘n’ roll’s mad scientist. In this age of instant consumption, his mystery and mystique has been every bit as important as the notes that come from his guitar. The two sides have always complemented one another, running parallel like a film and its score. But recently, White’s image has shifted to the unenviable position of being known for reasons other than making music. 2012’s Blunderbuss was a relatively vanilla affair that sounded thrown together during breaks from other hobbies, while headlines affirmed his preoccupation with other people, other endeavors and other bands. Sure, the fantasy White has constructed remains lucrative, but at what cost to his music?

Lazaretto, White’s second true solo release, is a musical return to form, a step away from the persona of Daniel Plainview-type shyster he’s assumed. With White, the truth is and will forever be blurry, but it seems the character of Jack White might not be as fictitious as he’d like us to believe. White sings with fury about adhering to expectations, and rallies for control; he won’t be told what to do. Though he claims many of Lazaretto’s lyrics are recycled from teenage writings, a scan of recent interviews reveals these themes aren’t contrived. Jack White isn’t Daniel Plainview; he’s been burned by people like him.

It’s not lyrical content, however, that bring White’s worshippers to the altar. In many ways White is our last guitar hero, and Lazaretto marks a return to the riff with a germination of edge sorely missing from Blunderbuss. White comes out swinging right away with the Meters-esque groove of “Three Women,” which finds money-hungry blondes and brunettes added to his traditionally red-headed lust. The groove gets even funkier with the record’s title track, propelled by a scorching, squealing solo (and some filthy fiddle work by Fats Kaplin) that builds to a monster serpentine passage. White’s guitar hasn’t stalked a song in this way in quite some time. But these tracks are just warm-ups for “High Ball Stepper,” an instrumental that sounds built for a duel. Howls of intertwined vocal and fiddle are broken up by spurts of drunken piano while White sprays percussive riffs like cannon balls and stomps all over the song with massive, distorted chords and Aeolian fills like he used with his old band.

And speaking of those Stripes, Lazaretto’s purveyance of timeless style and driving, “Blue Orchid” tone bring him as close as he’s been to that music outside of the band. Lazaretto feels like a record that could fit between Get Behind Me Satan and Icky Thump. Guitar tone aside, “I Think I Found the Culprit” even features a melody and progression that recreates “The Air Between My Fingers” as if the latter were recorded in a Nashville bar. With saloon piano, acoustic guitar, soaring pedal steel, piano and mandolin, White revisits one of his go-to themes of a lover up to no good. But it’s the album-closing “Want and Able” that has the strongest connection to White’s back catalog. Its solitary piano feels like a countrified companion piece to “White Moon,” with White defiantly singing, “Who is the who that is telling who/ Just what to do?”

As upbeat as many of these songs sound, the traditional bluesman theme of “I love you, honey why don’t you love me,” pulled directly from the Sticky Fingers honky-tonk of “Just One Drink,” is replaced by real angst. White comes off like a crotchety Luddite during the gorgeous country of “Entitlement,” but it’s really an anti-conformist statement that he wants people to leave him be. He sounds ready to give up on women during the moody, ferocious “Would You Fight For My Love,” seemingly defeated by a lack of passion and a lack of effort. That song includes the first of two references to becoming a ghost, the second coming during the shuffling piano groove of “Alone In My Home.” It’s as if he’s been hurt, but it’s not so bad anymore because isolation suits him, and the pain can’t touch him if he’s invisible or out of sight: “And alone I build my own home/ To be sure that nobody can touch me.”

In retrospect, very little has changed about the way Jack White does business. Even during his White Stripes tenure, records like Elephant were constructed and released on the fly, and were bookended by bouts of tumult (Google Jason Stollsteimer) and outside projects. He’s less consistent now, but White is an insatiable creative who gets ideas out no matter the form. White seems to be admitting through song that being Jack White isn’t easy, especially in 2014. He has always enjoyed a challenge, and in a strange way he’s once again an underdog. It must be a role he likes, because Jack White III has his groove back.