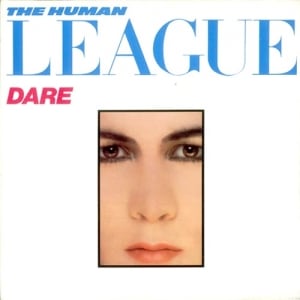 From the start, the Human League stood for an optimism that clashed with the nihilism of the punk scene that begat them. Despite the ominous, John Carpenter-esque tone of the commercial synthesizers available to them in the late ’70s, the Human League’s first iteration proved both socially aware and positive. As Simon Reynolds noted in his indispensable post-punk overview Rip It Up and Start Again, a song like “Blind Youth,” with its cheeky pro-bougie lines like “High-rise living’s not so bad,” provide “a dig aimed equally at J.G. Ballard and the Clash.” No Future was the mantra of the punks, but David Bowie, their godfather, saw the League as the future of pop.

Nonetheless, internal tensions between radically coiffed singer Philip Oakey’s desire to pursue that pop future and the lingering experimentalism of founding members Martyn Ware and Ian Craig Marsh led to the latter pair departing the band in 1980. Oakey, left with only visual artist Philip Adrian Wright and a band name saddled with the professional obligations and debts attached to it, filled their positions with two girls not yet out of secondary school, Joanne Catherall and Susan Ann Sulley, whom he’d spotted dancing at a Sheffield nightclub. Though Oakey also brought in backing musicians Jo Callis and Ian Burden to complete the lineup, the damage was done; the British music press, never the friendliest of chaps, crowed that the real talent had left the League, and most expected the band to quickly disappear, to be remembered only by nostalgic compilations of the “Sheffield Sound” that would pull “Being Boiled” alongside some early Cabaret Voltaire.

Instead, they recruited producer/programmer Martin Rushent, who helped them craft Dare, one of the handful of albums that can lay legitimate claim to having fundamentally altered the landscape of popular music on a massive scale. At least the public had some advance warning. After releasing rushed single “Boys and Girls” at the top of 1981 and scoring their first Top 50 hit, a trio of Dare singles all broke the Top 20. The first of them, “The Sound of the Crowd,” is, as Oakey aptly put it later, “one of the maddest records that’s ever got in the Top 20.” With serpentine synth lines that break to reveal cavernous bass noise, the song might have but two years ago been mixed as one of the band’s sinister but danceable numbers. With Rushent behind the boards, however, the song is a celebration, and even the robotically delivered lyrics of a compulsorily good time are without menace. “Add your voice to the sound of the crowd” isn’t a mocking chant of conformity; if anything it’s a blissful, communal release in the every-man-for-himself Thatcher era.

Nothing the band had done before sounded quite like Dare, and the next two singles only further consolidated this new direction. “Open Your Heart,” released closest to the album’s street date, is almost hyperbolically warm, with swells of open chords that make synthesizers sound like church organs and breakdowns that introduce lilting electronics redolent of a flute, if not outright birdsong. But it was the second advance single, “Love Action (I Believe in Love),” that truly hinted at the shift that was coming. Structurally, the song is pure disco, with a 4/4 beat, a simple but infectious bassline and a chorus begging for a sing-along. Yet the energy occupies neither of the polarities of electronic disco, neither the on-cocaine mania of Hi-NRG nor the glacial drug comedown of Italo disco. The song’s tone fits somewhere in between, the halting evolution of a machine edging its way into consciousness through dance. “Love Action” reached number three on the UK charts, an inconceivable achievement for the band even a year earlier.

The full album, released October 16, 1981, only took this idea further. Listened to in isolation, much of Dare is surprisingly dark. Opener “The Things That Dreams Are Made Of” unfurls with a lurching beat and a critique of empty consumerist values that makes the title phrase sound like a judgmental, Dickensian ghost forcing the listener to confront those now-sour dreams. The other two unreleased tracks from side one, “Darkness” and “Do or Die,” are groovy while retaining the grim elements suggested by their titles. Side two’s opening trio—an electronic retooling of the theme to “Get Carter,” the Judge Dredd-inspired “I Am the Law” and “Seconds,” Oakey’s vituperative open letter to Lee Harvey Oswald—takes things to even darker terrain.

When listened to alongside the League’s first two albums, however, these songs sound altogether more buoyant and invigorating, the band’s new lineup delivering on the old one’s promise to meld sometimes harsh futurism with hope. Indeed, the entire album maps out the once-cold band’s path to humanity. “Darkness” and “The Things That Dreams Are Made Of” give robots dreams and fears, “Seconds” anger and loss, and the three pre-release singles romance and social longing. Even “I Am the Law” takes on a cheeky undertone from this perspective, a lark that doubles as the group’s last full dalliance with its early sound.

It all culminates in “Don’t You Want Me.” Today, this track’s placement as the album’s closer seems a cynical move to make the listener get through the whole LP for the hit single, but in reality Oakey hated the song and even fought its release as a fourth advance single. Now the idea of his resentment, and the whole band’s dissatisfaction with the bouncy final mix, is unfathomable, for the song sounds as if it were destined to be the scene-changing single that it swiftly became. On its own, the song’s propulsive synth-line (as classic a riff as anything played on a guitar), its internal bickering of possessive male and self-confident female voices, and its irrepressible chorus make for an eternal pop classic, smarter than it appears at first glance while remaining simple enough to transcend the inevitable dating of early electronic, mainstream music.

In the context of the album, “Don’t You Want Me” is the full flowering of the band from one of Sheffield’s many quasi-industrial synth acts into the standard bearers not only for a new kind of music but of its total aesthetic. The tension between Oakey’s androgyny and Sulley’s and Catherall’s combined smolder—as much an aural trait of their music as a crucial element of their live appearance—is never more perfectly laid out than in Oakey and Sulley’s verbal pas de deux. The accompanying music video, in which the band acts out parts in a miniature film and then watches that movie on monitors and helps with editing while moving the song’s story along, erects then collapses several layers of simulacra in a fitting abstraction of the group’s paradoxically inadvertent yet carefully composed image.

The original Human League fell apart over failing to live up to Gary Numan’s chart success, but Dare redefined what success for a synth-based group could be. Arguably, it ended the first wave of post-punk, of groups like Public Image Ltd, Joy Division and various Manchester/Sheffield acts experimenting with pop forms, punk attitude and new technology. But even more than Numan’s popularity, The Human League set the standard for post-punk’s coalescence into a new pop, the standard by which all other operators in the genre were judged. Ware and Marsh’s post-League outfit, Heaven 17, released a hat-trick of fine synthpop albums filled with knotty, politically charged anthems like “(We Don’t Need This) Fascist Groove Thang,” but those albums combined cannot reach Dare’s purity of expression.

Hell, even the Human League never matched themselves again; apart from excellent follow-up singles “Mirror Man” and “(Keep Feeling) Fascination,” the band never released anything remotely on Dare’s level. Nonetheless, any group should be so lucky to have the problem of being unable to set a new template for pop music a second time. Bowie’s early prediction that the Human League were the future once threatened to be the ironic epitaph on an early grave. As Dare closes in on its 35th anniversary, though, his forecast seems, if anything, short-sighted.