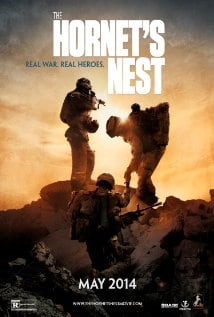 [xrr rating=1.5/5]The Hornet’s Nest projects the air of a self-serving and self-conscious video diary about an attention-seeking war journalist from the get-go, and it never lets up. It would be nice to say the same about the war footage – that it never lets up – the way its most obvious antecedent, Sebastian Junger and Tim Hetherington’s magnificent Restrepo, doesn’t let up. But the documentary’s fatal flaw is that the power of its core footage, of American Army Rangers and Marines fighting in Afghanistan, is watered down by its insistence on putting a media personality front-and-center.

Mike Boettcher is an aging war correspondent for outlets like “Good Morning America” and “Hardball with Chris Matthews.” In this doc, he claims to be on his last trip to a warzone and brings along his son, Carlos, whose credentials as a journalist (if any) are not mentioned. The trip is framed as a kind of ceremonious passing of the torch. The two embed first with Rangers and then with Marines and follow them into battle with the Taliban (or possibly al Qaeda or any number of other combatants who are not made clear).

Amazingly, given the wealth of raw war footage and access to soldiers that was available, the father-son narrative is the overwhelming focus of this doc, and the soldiers—including their names, back stories, feelings about their situation and even their specific missions—take a backseat. This is mainly frustrating, as we continually see troops in the background of footage that should be focusing on them. The overwhelming feeling, frankly, is that this whole thing is a wasted opportunity, and that there are much better documentaries for people who are genuinely interested in what the Afghanistan war looks and feels like.

Its telling that The Hornet’s Nest was directed by two men whose IMDb profiles describe them as “veterans of the entertainment industry” who have both worked in financing, distributing and marketing, as if that were what was needed to make an on-the-ground film about US soldiers and Afghan people in war. When filmmakers David Salzberg and Christian Tureaud aren’t relying on footage of Boettcher worrying about the safety of his son (who, unlike the soldiers, had absolutely no reason to be there) or delivering clichés about brothers in battle, they are underscoring the American troops’ offensives with fast-paced techno music, which they must have thought would match up wonderfully with their footage since that’s the kind of thing the US military does to make effective TV ads for Army recruitment. Much like those ads, this movie comes off, at best, as inconsiderate of American soldiers and Afghan citizens, and horribly patronizing at worst.