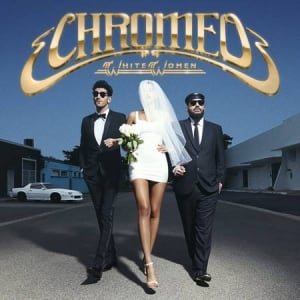 [xrr rating=3.5/5]As the fourth album put out by Chromeo in a decade, White Women further solidifies the electro-funk duo’s status as more than a novelty act. As suggested both by their stage names of Dave 1 and P-Thugg and by their claim to being “the only successful Arab/Jewish partnership since the dawn of human culture,” Chromeo plays their retro resurrection blatantly tongue-in-cheek. Though the irony that pervades each of their albums runs thicker than mustache wax, the two musicians born David Macklovitch and Patrick Gemayel are also highly skilled songwriters and masters of fat, funky beats.

While sophomore album, Fancy Footwork, served as their launching pad to notability with infectious and goofy-titled gems like “Bonafide Lovin’ (Tough Guys)” and “Tenderoni,” Chromeo’s music has never been particularly pop-oriented, relying instead on the shtick of reviving some of the more over-the-top components of electro funk with only a hint of more modern synthpop. That has changed on White Women. “Jealous (I Ain’t With It)” opens the record with a candy-colored electro riff that’s pulled straight from Top 40 radio. The duo themselves reportedly rejected what guest producer Oliver Goldstein laid down due to it sounding too much like Katy Perry. But the duo caved, and for good reason—though it starts off poppy, before long the “Ghostbusters” synth lines work themselves into froth and the whole thing feels like Chromeo 2.0, an important progression for such a niche sound.

Ever since Daft Punk’s Random Access Memories set the world on fire last summer, you can’t swing a dead-goldfish platform shoe without hitting an album with reanimated disco influences. White Women has moments of this as well, most notably on lead single “Over Your Shoulder.” Opening with a recurring guitar riff that sounds a little like the janglier moments on Pink Floyd’s “Another Brick in the Wall” (and complete with cosmic effects reminiscent of the closing sequence of Steve Miller Band’s “Fly Like an Eagle”), “Over Your Shoulder” is daffy and danceable, with plenty of falsetto flourishes. The band’s winking, cocksure songwriting chops are on full display with lines like “And even though you’ve got small breasts/ But to me they look the best/ I confess/ I wanna go home and get you undressed.”

Chromeo have established themselves as merry spanksters to the point that bringing in featured guests doesn’t take much arm-twisting. Toro y Moi adds his vocals to the pop/funk fusion of “Come Alive,” Solange Knowles adds a sultry element to the slower and sappier “Lost on the Way Home” and Vampire Weekend’s Ezra Koenig stamps his name on the playlist with piano-plunking and finger-snap driven “Ezra’s Interlude.” These contributions add greater texture and complexity to the album, but it’s really Dave 1 and P-Thugg’s bread and butter that powers White Women. “Play the Fool” busts out an downright nasty jam midway through, “Somethingood” stretches out its funky legs and stays awhile and “Hard to Say No” conjures just a hint of Culture Club. The best guest contribution comes on the manic electro-bouncer “Sexy Socialite.” Proving Chromeo doesn’t save all the choice lines for themselves, backup singer Tawatha Agee intones the best rhyme on the album with “So why you comin’ at me, homey/ With so much acrimony/ Your testimony’s phony/ And the truth is you don’t know me.”

White Women squelches any lingering doubt about the band being more than a novelty act. While pinpointing the seam between irony and earnestness can prove to be a maddening endeavor, White Women may be the best evidence yet that it’s a hell of a lot more fun to just kick back and enjoy the show.