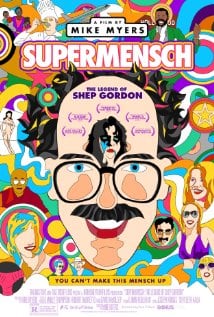 [xrr rating=2.0/5]If you’re looking for a shallow puff piece of a documentary full of rehearsed celebrity interviews, humblebragging and dubious, self-serving anecdotes, look no further, because Supermensch: The Legend of Shep Gordon has arrived. Gordon, a talent manager who made the careers of such diverse artists as Alice Cooper and Anne Murray, enjoyed his years of sex and drugs and rock ‘n’ roll, and when the film opens, we’re promised a light, entertaining look at his astonishing life, starting with his accidental foray into management in the very early 1970s.

Sadly, Supermensch never really knows what kind of film it wants to be. After the initial fun, the film dries up, leading us to the not-so-fascinating details of what it took to make the Alice Cooper band famous. Short answer: killing chickens. That’s the long answer, too, and if you’re watching this film, you already knew that. It’s interesting enough to see the sheer amount of work involved in crafting personae and developing the fake publicity that lead to real publicity, but the novelty of seeing an aged, pot-bellied Cooper wearing plaid pants and lugging golf clubs around wore out a decade ago; there’s nothing new here.

After a few anecdotes, it becomes clear that Supermensch is no more than a hagiography of a man who is only a mensch if one defines “mensch” as “not as bad as all the other assholes in the biz.” Disturbing little details about Gordon slip through, never to be commented upon: his jokes about underaged girls, the fact that he sold drugs to Janis Joplin around the time she overdosed and, most tellingly, the frequent mention that Gordon deserves a woman to cater to his every whim, and also to give him babies, because he’s just so darn sad that he never got around to having a family.

That in itself is creepy enough, but it gets worse when we’re introduced to his lovely family of four children. The grandchildren of a former girlfriend whose mother had died young, Gordon adopted these kids many years ago, and two are interviewed for the film. They hint at conflict with Gordon, though details are never mentioned, of course; conflict might make Gordon look bad, and people only exist in Supermensch to make him look good.

This trend continues throughout the film, as clients and ex-wives and relatives are brought out for brief moments—sometimes only in photos—so they can edify our alleged supermensch, who never fails to note how they’ve let him down in some way. There is also the tendency to use archival footage of a celebrity who is no longer with us while someone else’s voice is dubbed over, which gives the brief illusion of actually hearing the celebrity speak; the film is literally putting words in dead people’s mouths. Amidst the parade of character witnesses are a few unintentionally funny moments, such as when faces are blurred so people won’t be inadvertently identified as one of the assholes Saint Shep tolerates, you know, for the greater good.

This judgmental attitude becomes grotesque in the case of Teddy Pendergrass, the R&B legend Gordon managed for many years. Gordon, a practicing Buddhist, believes in karma, and he tells us that he believes the near-fatal car accident that left Pendergrass paralyzed was karmic justice after the singer canceled a concert. Of course, at no point does this horrifying pop culture version of karma come into play when talking of Gordon’s own health problems. For both Gordon and the film to judge one person’s tragedy as karma and another’s as a painful personal struggle is so disingenuous as to be insulting.

At heart, Supermensch is a documentary about celebrities, by celebrities. It’s both culturally tone-deaf and tonally inconsistent, full of the kind of accidental cynicism guaranteed to make you cringe. There is a sad irony here, however: Shep Gordon himself seems experienced and introspective enough to recognize the documentary’s inherent issues, but such introspection, as welcome as it would have been, never had any chance of making the final cut.