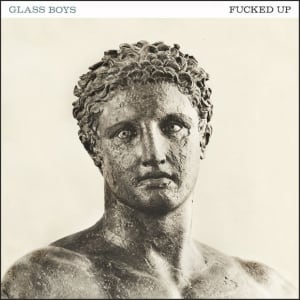 [xrr rating=3.0/5]Glass Boys, Fucked Up’s latest and shortest full-length, is more than back to basics for the band. It sounds simpler than almost anything they’ve ever done. Outside their endless string of singles, the band has never sounded so straightforward, a dramatic come down from 2011’s massive LP David Comes to Life and the recent entries in the group’s Chinese Zodiac series. Indeed, this year’s installment, Year of the Dragon, sounds twice as complicated and ambitious as Glass Boys in half the time.

Yet the bracing simplicity of the LP matches the blunt reflection of its lyrical content. From thrashing opener “Echo Boomer” to the closing title track, Damian “Pink Eyes” Abraham growls and screams his way through childhood reminiscences and adult introspection. In “DET,” Abraham asks, “Why is the past so pristine?” after recounting impressionistically recalled observations, eventually answering his own question with, “Maybe I know it could’ve been me instead.” “Paper the House” expresses similar sentiments about experiencing and witnessing tragedies, noting with relief, “Not all of them made it/So I’m glad some stayed ‘til the end.”

Of course, Abraham’s rough vocal style can make his words nearly indecipherable, so without a lyric sheet the emotional power of the record is diminished. This is not altogether unfortunate when you take into account some of the hollow poetry, but references to Macbeth and Eurycles get lost in the mix. That leaves the music engage the audience, and sadly the stripped-down approach makes for a homogenized sound that lacks the unpredictability that make Fucked Up one of the great post-hardcore groups.

There are exceptions. “Sun Glass” opens with a brief acoustic intro before Abraham’s roar disrupts the tone, while “The Art of Patrons” boasts a clear-voiced chant, “It’s the privilege of mass delusion” that makes the only anthemic, crowd-ready moment on the LP. Most arresting are the last two minutes of “Warm Change,” which lurches into a guitar breakdown that starts out sounding like the fuzzy outro of The Stooges’ “I Wanna Be Your Dog” before morphing into the sort of elegant, boastful solo that once upon a time would have gotten the band drubbed out of punk. Not that these musicians particularly care for genre myopia; “Year of the Dragon,” after all, sounds like the great lost Diamond Head epic.

Their capacity for hopping boundaries is ultimately what makes Glass Boys feel like so slight. The album is an enjoyable listen, with no glaringly weak tracks and, taking into account Abraham’s obscuring screams, no bum lyrics. Yet Fucked Up sound so straightforward here that apart from a few moments that change up the formula, the songs can barely be distinguished from one another. Buzz-saw punk riffs blend with power pop structures so fluidly that Abraham’s vocals no longer oppose this melodic sound, but become another facet of its aggressive, lilting noise. The songs of Glass Boys are sure to be a hit with crowds, and it deserves to be. But it’s a disappointing effort from a band capable of mixing its poppy balance with more ambitious compositions.