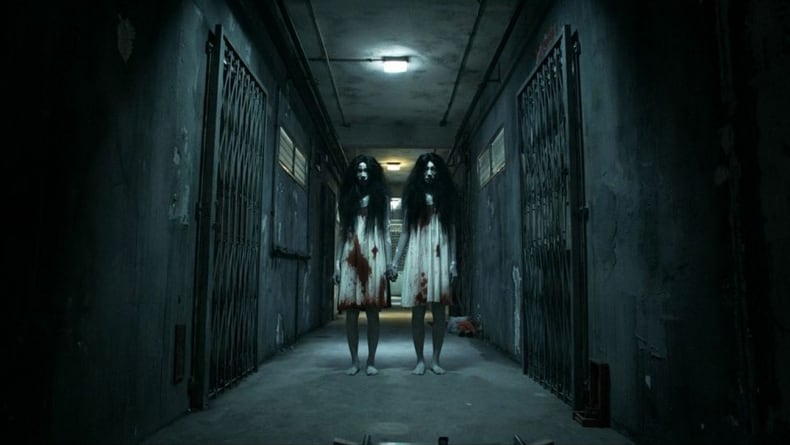 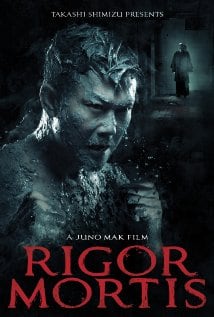 The first scenes of Rigor Mortis are appropriately shot in near monochrome, the better to capture the bleak brutalist apartment building and spiritual darkness that overwhelms its protagonist like a cloud of psychic dust. Chin (Chin Siu Ho) is an actor who’s hit bottom, and has arrived at his new apartment with tormented memories of his wife and child and the determination to hang himself. But with his neck dangling from a noose, he awakens the apartment’s cruel ghosts and is saved from his fate by restauranteur Yau (Anthony “Friend” Chan). His savior also happens to be a vampire hunter.

This bleak, atmospheric horror movie takes its premise (and male leads) from the popular Mr. Vampire franchise of Chinese hopping ghost movies, and the plot may be hard to follow even if, like me, you are familiar with the genre. While Mr. Vampire is a playful, humorous look at the supernatural, Rigor Mortis has a deadly seriousness that is not typical of horror movies and certainly not of Mr. Vampire. Every death in the film is heavy with grief, every superhuman feat weighted with intense pain. The film oozes suffering, yet the heroes endure and push their superhuman but still vulnerable bodies beyond the limits of pain.

But if the body feels pain, it also feels pleasure, and Rigor Mortis conveys this in a surprising way: food. Yau can rattle off his regular customers’ favorite dishes, and like the otherworldly underground restaurant in David Cronenberg’s Existenz, this is another creepy movie with a restaurant where I’d love to try the whole menu. Yau catches on that there’s a new customer in town (Chin) when there is an increase in the usual number of orders of sticky rice. This isn’t just a random menu item. Sticky rice is part of the lore of the Chinese hopping ghost or vampire, and in its uncooked form it is said to draw out evil spirits. In one inspired scene, the James Joyce-spectacled Chan (who like his co-star, is a veteran of the Mr. Vampire franchise) cooly explains that vampire hunters by necessity had strong relationships with sticky rice suppliers. So it was only natural that some vampire hunters would open up restaurants.

Rigor Mortis takes its time getting to the horrific mayhem that genre fans crave, but its first half gives audiences something they need: emotional catharsis. Chan gives a charismatic performance, and Hee Ching Paw brings a shaded, tragic presence to Auntie Mui, whose character shifts from gentle matron to grieving wife to maniacal conjurer of evil. This Chinese ghost story serves up plenty of gore, but it also faces a deeper horror head-on: the acute sense of loss that comes with the death of a loved one.

I can’t entirely judge the film’s cinematography from the standard resolution viewing link I screened, but I can tell the film would look fantastic in a theater, with moody lighting, sweeping camerawork and frenetic action. Rigor Mortis doesn’t always make dramatic sense, but it always makes emotional sense, and sometimes that’s all I ask for in a movie.