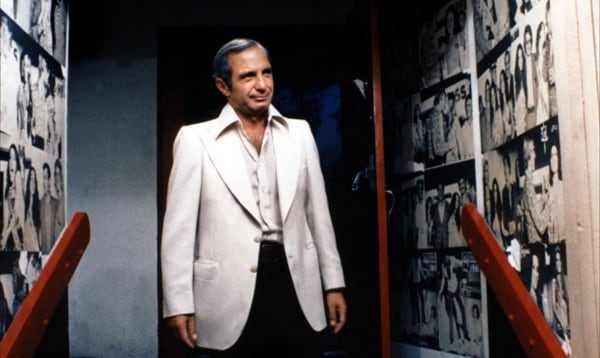 “I won’t call my work entertainment. It’s exploring… a good movie will ask you questions you haven’t been asked before … or, if you have thought about them, you haven’t had the questions posed this way.”

John Cassavetes’ distinctive filmmaking process favored raw emotion over intellect. But even when the director tipped the balance to the latter, his films are unmistakably, emotionally instinctual. Cassavetes considered AWoman Under the Influence, “the first picture I’ve had anything to do with that wasn’t made out of pure, simple feeling.” Woman earned Cassavetes some of the best reviews of his career, and he hoped to capitalize on it with a project that was essentially a gangster movie. But this was Cassavetes, a man for whom Hollywood tropes were anathema, so this was not a typical genre picture.

Cosmo (Ben Gazzara) works at the Crazy Horse West, a Los Angeles strip club he runs but does not own. He pays off one of his gambling debts, to a loan shark (played by Cassavetes’ frequent collaborator/producer Al Ruban), then parties with his favorite strippers, only to lose another 23 grand at a mob-run poker game. The syndicate offers to let Cosmo repay his debt by killing a man they claim is a Chinatown bookie, but they clearly expect him to be killed in the process. Cosmo survives the effort, but is gravely wounded, and by the end of the film, he’s bleeding but alive as his strippers go through the usual motions. 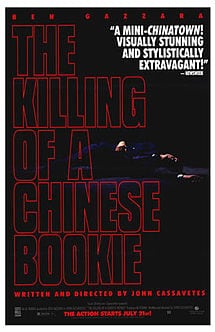 If Minnie and Moskowitz was Cassavetes’ screwball comedy, The Killing of a Chinese Bookieis his film noir. The director acknowledges certain genre tropes—women, gambling and flashy, menacing mob guys. But his movies pay no heed to genre conventions, flowing in his signature exploratory style.

As usual, the director cast the film with friends and family, but in one instance this coincides with something of a genre subversion. His friend Timothy Carey, who spoke at Cassavetes funeral, had been a prolific character actor since the ’50s, typecast as a hulking, violent bad guy in more than a few films noir. Carey plays the hulking gangster Flo, towering over Cosmo with effortless menace. Their relationship, however, is never allowed to fall into the usual dynamic of tough guy and hard luck patsy. Cassavetes’ working method was to shoot far more footage than he’d ever use in the final film, and among the copious amounts of footage of Carey that didn’t make the cut was an extended sequence in a parking garage in which Carey sang “The Star Spangled Banner” over and over to the little man who owes him 23 thousand bucks. If this had been a real film noir, Flo would have taken Cosmo into the parking garage for a dramatic execution, but Cassavetes redeems his friend’s reputation as a heavy, and Flo lets Cosmo go. “Take care of my friend,” he tells Cassavetes regular Seymour Cassel, and he doesn’t mean with a gun.

So this isn’t your ordinary gangster movie, but it’s also not a typical Cassavetes film. Unlike the majority of his work, it doesn’t come from personal experience. “The fun and the challenge of the film was to imagine a self-contained world different from the one I live in; to move and to live in it.” But in this immersion into another world, so familiar from the movies but so foreign to his life experience, he found a resonance in this violent milieu with the world of filmmaking by allowing his story to ask a simple question: How does a man make his way in the world as a man if he doesn’t have the money? The director considered film producers gangsters, and was convinced that the mob ran the entertainment business. For all that, his gangsters aren’t black and white villains.

Cassavetes’ quasi-genre ploy for box-office success tanked. The Killing of a Chinese Bookie was a critical and commercial flop, but almost four decades later, it’s one of his most celebrated films. It’s as free-form as any Cassavetes film, but it’s grounded in one key aspect: the camera. As suits a film about performers and performing, his character actors expressive faces are bathed in elegant light that can suggest a low-rent, free-form Rembrandt. The script is less talky than his other films, giving you the chance to simply watch human behavior. This was Cassavetes’ gift. As challenging as his films can be, he found humanity in gangsters and villains as well as in regular guys, from a fragile Chinese mob boss to a strip-club manager who gets in over his head.