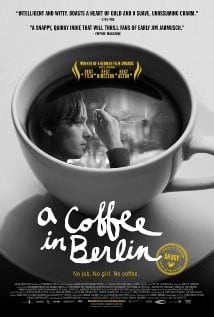 [xrr rating=3.0/5]A bustling city. Black and white cinematography. Jazz music. Not Woody Allen? Despite the outward signs, A Coffee in Berlin is German director Jan Ole Gerster’s debut film. The city is Berlin, not New York, and instead of a neurotic constantly breaking the fourth wall, the subject is a twenty-something law school dropout with no ambition. The film itself is spare and quintessentially indie, which isn’t so surprising considering the film was Gerster’s thesis project for the German Film and Television Academy. But its widespread critical acclaim in Germany – sweeping the 2013 German Film Awards – was unexpected for such an understated film. Drawing on influences from the French New Wave, Italian Neorealism and obviously Allen, Gerster’s film explores the reality of this generation’s financial dependence, frustration and aimlessness. Although the film is presented in a series of wildly different vignettes, they are connected by Niko’s continuous search for a cup of “normal” coffee.

The film tracks a very eventful day in the life of Niko Fischer (Tom Schilling), from one bizarre encounter to the next. His inability to commit prompts the end of his relationship. A government psychologist triggers Niko’s short temper and deems him unfit to regain his license after offenses for drunk driving. A forgotten classmate with unresolved self-esteem issues (thanks to Niko’s bullying), Julika (Friederike Kempter), bumps into him at a restaurant and invites him to her performance art show. Aspiring actor Matze (Marc Hosemann) drags Niko along to a movie set hoping to weasel himself into a small part. Reality bears down on Niko when he meets up with his unsympathetic father (Ulrich Noethen) at the golf club and his allowance is entirely cut off. The final character Niko meets during this busy day is an old man reminiscing after returning to the city after 60 years. That man’s sudden heart attack perhaps serves as the kick Niko needs to drum up some motivation and do something with his life, despite its incongruity with the lighter, albeit dark, tone of the overall film.

The premise itself is a familiar formula: a twenty-something adrift in the big city. And the way it is presented – with an endless string of vignettes – recalls recent films such as Oslo August 31st and Frances Ha. Despite the simplistic setup (to the point where some might characterize it as hackneyed and the hallmark of a film school student) and no matter how many times you’ve seen a similarly-minded film, the romanticism inherent in that is undeniable and works its magic on viewers. Fueling this appeal are Gerster’s nods to the likes of Allen, Jarmusch, Godard and the list goes on. This includes the jazz score by Cherilyn MacNeil and The Major Minors, which fills the interludes between scenes and the lapses in dialogue within them.

The cinematography certainly does achieve overwhelming melancholy. The visual is compounded even more by the overriding silence of the film. While the jazz score does permeate, it only seems to swell when the dialogue dissipates, signaling quiet moments of contemplation. Composition-wise, Gerster and cinematographer Philipp Kirsamer use the camera as an extension of Niko’s emotional state, and sometimes redundantly so. They consistently use stationary wide shots to convey Niko’s immobility. And with the bustling Berlin as a fast-moving, blurred backdrop those shots become even more evocative. In contrast, Niko’s moments of action find the camera chasing him through the streets of Berlin, seemingly so used to the stasis that it has a hard time keeping up.

There’s no denying that A Coffee in Berlin shows great potential from Gerster: distinct tone and adept skill with story. However, aspects of the film reveal grating clichés. Most notably, the search for coffee that ties together the entire film and its disparate vignettes is a source of comedy, but the device wears thin as the film goes on. It diminishes an otherwise fully cohesive film that could have managed without such a stilted ploy. A Coffee in Berlin is a commendable debut but begs maturity on Gerster’s part. With such a successful starting point, Gerster is bound to only improve in future.