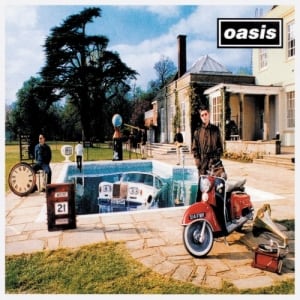 The story of Britpop as a musical moment ends sometime around 1997, and it coincides with the release one particular album: Oasis’ Be Here Now. To the press and to music fans, this album was too much too soon, a symbol of rock star excess from a band that seemed all too ready to embrace it. It also signaled a downturn in the band’s popularity; while Oasis remained a huge live draw, they never reached the heights of their mid-‘90s heyday again, especially in the United States. As a result, Be Here Now is considered more than just a bad album: it’s a career-killer, a black mark that kept Oasis from achieving their lofty ambitions, and one that serves as a warning to bands that have followed. Hell, even Noel Gallagher has nothing nice to say about the record. Still, now that almost 20 years have passed since its release, I think it’s fair to pose the question: is the album really that bad?

“Excessive” is the term most used to describe Be Here Now, and it’s not an inappropriate term. Any glance at the song lengths will tell you as much. Only two songs are less than 5 minutes long, and two of the album’s big singles, “D’You Know What I Mean” and “All Around The World,” clock in at over seven and nine minutes, respectively. Actually, the latter is over eleven, if you count the two-minute reprise of “World” that closes the album. That overkill goes beyond the song lengths, too; the songs waste no audio tracks, with string arrangements and guitar solos strewn everywhere. Oasis may well have overreached, but I’d argue that that’s where the problems end.

Listening again with fresh ears, it’s clear that Be Here Now is a good album that merely falls short of being great. Yes, everything on the album is done to excess, and it’s likely that Owen Morris’ production won’t stand the test of time, but Noel was in his prime as a songwriter in 1997, and the best songs on this release rival anything on its more beloved predecessors. Most of the singles are stone classics, frankly. Yeah, “All Around The World” is an okay idea stretched to its breaking point and a few yards past it, but “Stand By Me” and “Don’t Go Away” stand proudly as being among the group’s best work, and even “D’you Know What I Mean” can’t help but work on its own ridiculous terms.

That’s not to say that this was an album of a few hit singles and some filler. Song for song, Be Here Now displays quite a bit of strength, even if it’s not as consistently great as its predecessor. Aside from that reprise of “All Around The World,” there aren’t any tracks that could be regarded as inconsequential. Even when some tunes seem to come up short, the band does their best to salvage them. For example, “I Hope, I Think, I Know” has the bare bones of a song at its core; it’s nothing more than a good idea. However, the spirited, uptempo performance, including a stellar vocal from Liam, turns the song into something truly magical.

Lyrically, Noel appears to have used the record as a middle finger response to the various criticisms levied at Oasis; namely, their supposed appropriation of older music and their very visible obsession with the Beatles. Right in the first track, Noel’s lines name drop two Beatles songs and a Dylan album title, only to reference the Beatles again on song number two. On a few songs here, Noel seems to be inviting the sort of jabs that Oasis had drawn for years, and that’s sort of the point of the album. Be Here Now works mostly as a statement of intent, a line in the sand drawn by Oasis. Listeners could either be with them or against them. Sadly, it ended the band’s worldwide dominance as American listeners ended up choosing the latter.

Truthfully, its bad reputation has more to do with celebrity culture and the band’s personal attitude, rather than anything that’s actually on the record. Oasis set out to be the biggest, best band in the world, and they certainly came close at the beginning of their career. Be Here Now certainly fulfills the criteria of being Oasis’ biggest record, if not their best. But it was their attitude, their open lust to be great, that turned off listeners here in the States more than one bad album ever could. Noel Gallagher has invoked Kurt Cobain as being an inspiration more than once, but Cobain may have been the worst thing to happen to Oasis. Whether he wanted to or not, he set a precedent for how we perceive and ordain rock stars: since his rise and fall, we’ve wanted our heroes to be unwilling icons, normal folks who just happened upon fame while searching for some higher artistic calling. Whenever music fans–especially rock fans–get a hint that a musician might have “inauthentic” desires for stardom, we tear them down. Granted, the volatility of the Gallagher brothers didn’t necessarily help Oasis in this regard, but it’s certainly arguable that their desire for greatness cost them the respect of a fickle audience.

Hopefully, we’re past some of the “authenticity” hang-ups that we had in the 90’s, and it’s definitely a good time to revisit Be Here Now, if only to think about what may have been. They never had a chance of getting as big as the Beatles, but they were reaching some astronomical heights before they were derailed in 1997. Looking back now, the album isn’t the career-killer that many–including Noel Gallagher–seem to think that it was. Sure, it’s kind of a mess, but it’s still mostly Oasis doing what they did best.