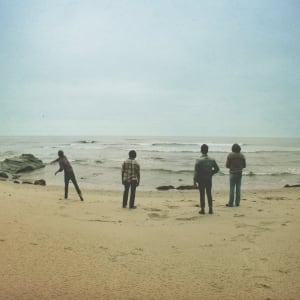 [xrr rating=4.0/5]Ride the Black Wave is a product of its creators’ location, specifically sun-soaked California. It’s not, however, necessarily borne of that state’s contemporary station. With this album, the Donkeys seize, dismantle, stitch and sew together the disparate aspects of West Coast music that came before them and craft something equal parts homage and fresh. Sonically, there’s no pigeonhole to stuff the Donkeys into with this one; coastal country dream folk pop might be the best approximation.

The 11 songs amount to a series of vignettes, many of them quite short (four fall under the two-minute mark). Despite this and the variety from cut to cut, the record doesn’t feel like a mismatch of unrealized sketches. Ethereal as it is, there remains a continuity that is difficult to pinpoint. Suffice to say, it has a visual sensibility and works to generate a state of mind within the listener. With its freewheeling vibe, it is impressionistic enough to conjure the listener’s own summertime memories, in turn invoking the emotions that accompany them. Road tripping to a beach, feeling sand shifting through your fingers, tasting salt water as waves deal you a wallop — these are the sensations the album delivers.

Opening with the sounds of seagulls and rolling surf, “Sunny Daze” glides you into the record with sunset guitar strumming and drums of languid propulsion. The wanderlust ambivalence defining the record is set in lines like “Should I stay in California?/ Should I move to France?,” depicting a confliction that one is oddly not in a hurry to get out of. It is by far the album’s longest track at nearly seven minutes, but it never feels plodding. It ends in energetic fashion, vocalist Sam Sprague singing repeatedly “Stuck in a sunny daze” as a roiling guitar comes to the fore and envelops you in a dusky fog.

Arriving after the brief instrumental “The Manx,” “Nothing” gives a level of unease to proceedings with vocal harmonies singing about losing one’s mind to drinking amid handclap rhythms and ascending guitar lines. The tribal groove of the percussion casts images of a dark chant surrounding a late night bonfire. Successor “I Heart Alabama” is comparatively jaunty and whimsical, an acoustic travelogue of contentment. The record’s finest moments come in the second half — the two sides separated by the Indian-inflected instrumental “Imperial Beach” — first among them being the watery title track. Flowing with surreal lyrics of merging with the sea and starfish latching onto the narrator’s face, it’s nocturnal and evocative, and worthy of lending its name to the album as a whole. It ends on a bed of feedback and distortion, like an AM radio signal being tuned into, or a new dimension being accessed. “Bahamas” then starts with some clever misdirection, a slide guitar, wistful cooing and a maraca shuffle creating a Caribbean-twinge melody before a cymbal crash sweeps it all away. In its absence arises sparse piano twinkling, the return of squawking gulls and waves breaking on the shore as the voice of Adrianne Verhoeven arises like a haunted (or haunting) water spirit. It’s creepy and touching, a classic heartrending ballad that sounds as though it were recorded underwater, complete with vintage girl group drums.

Closer “Shines” does just as its name states. It just fucking rollicks and has that send-off feel, a foot-tapper full of resolve. The organ notes and bluesy guitar riffs give it a Memphis soul feel, the pieces coalescing into a tune carefree, sweaty and saturated in the sun, Sprague declaring “Got no future and no past/ Present only thing that lasts” with wild abandon. It’s a sentiment that defines Ride the Black Wave, and as such, it’s about the best record for heralding the onset of summer’s sunny days.