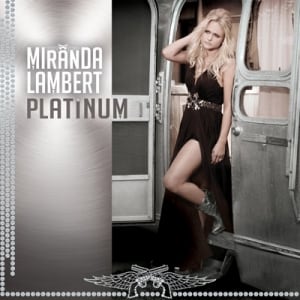 [xrr rating=3.0/5]“Charlie always said he’d like to leave here, so he turned eighteen and he left our sleepy town/Letters came and went and I kept waiting for Charlie to come back and bring the life he’d found.” That’s “Me and Charlie Talking,” from Miranda Lambert’s 2005 debut, Kerosene. The wistful paean to small-town living and not leaving the little people behind seems prescient now, almost an apology for the small town and the music she seems to leave behind in her new album. Kerosene was Lambert’s first album to go platinum. Her latest release is simply called Platinum, and it’s neither a greatest hits collection nor wishful thinking. But it is a pop crossover move, one she’s been threatening to make for years now. Like Eric Church’s recent The Outsiders, her country music is stronger than her pop moves, but unlike Church her pop moves are stronger, and so is her country. But this is her least consistent album in a career that hasn’t had many clinkers.

Lambert’s break came in 2003 when she placed third on the reality television show “Nashville Star,” a country music-only version of “American Idol.” Platinum is Lambert’s fifth solo album (though she’s a major part of the two Pistol Annies albums), and its title tells much of the story. Instead of ambivalent stories about leaving small town folk behind, her ambivalence is now about celebrity and going platinum, about fashion choices, both on the runway and on the stage.

Lambert has edged gradually away from the honky-tonk and classic country ballads that marked her early albums. She still is a tough country woman with the Pistol Annies, but she goes more pop on Platinum, if retaining the distinctive country twang. As her albums grew more bombastic, I was worried the simple pleasures of her sound would go away. But despite overproduced tracks like “Babies Makin’ Babies” and corn like “Gravity Is a Bitch,” there are catchy hooks here that happen to be more pop than anything she’s tried before.

The title track isn’t one of those great tracks, and its message is mixed. “What doesn’t kill you/ Only makes you blonder” could be taken as a scathing indictment of vanity and a smart paraphrase of Nietzsche, but however sharp the message the delivery system is a dud of a pop crossover, its processed chorus signifying the processed blondes she targets, but its hook is more obnoxious than catchy. But the hooks must be reaching her audience, because the album quickly became her first number one on the Billboard pop charts. The lyrics are those of a conflicted pop star taking on the persona of arrogance: “Somethin’ bout platinum irrefutably/ Looks as good on records as it does on me.”

Her mixed message would go down better if the music did. Taylor Swift’s move from country to teen-pop works because she sells the tween-pop just as well as she sold her country; it’s part of the persona of a young woman conflicted about becoming an adult and letting go of childish things. But Lambert’s pop move loses sight of her particular gift, and puts her outlaw authenticity (cf. Crazy Ex-Girlfriend and the Pistol Annies albums) into question. It’s the country music equivalent of the rift between Exile in Guyville and Liz Phair, the difference being that Phair’s Avril Lavigne move featured much better songwriting than Lambert’s pop.

Lambert’s pop has hooks. “Little Red Wagon” has an infectious chorus, but depending on the mood I’m in it can sound like obnoxious pop radio. Is this what any Lambert fan wants to hear from her? What mood will I be in next? What mood will Miranda Lambert take next? The singer has held on to her country music bonafides win her side project the Pistol Annies, and if you want to hear Lambert the honky-tonk tough chick, that’s the place to go. If you’re suspicious of a country singer going pop, you won’t be part of the crowd that makes this go platinum.

Collaborations get closer to the old Lambert, like “Smokin’ and Drinkin’” with Little Big Town and the Carrie Underwood duet “Somethin’ Bad.” But in another sign of the move away from small-town feel to stardom, Lambert’s paean to Priscilla asks what it was like to be married to Elvis, not unlike how she’s now married to country star Blake Shelton, “Married to man who’s married to attention.” Would it be too much to ask for another “Me and Charlie Talking”? I guess artists grow and make money and move on.

But the old Lambert is still here in the ironic “Automatic,” a country-pop ballad that laments, “Hey, whatever happened to waitin’ your turn/ Doing it all by hand?/ … Back before everything became/ Automatic.” And apparently back before old-fashioned country singers went pop. The album swings back in time to the western swing throwback “All That’s Left,” backed up by the appropriately-named Time Jumpers. I think it’s great that Lambert mixes genres, but the sequencing loads the album with the potentially obnoxious pop before opening up to her roots. Is there a metaphor in that sequencing? There was a platinum opportunity to cast Lambert as a woman of conflicting multiple personalities, and if you felt like reprogramming the track sequence you might come up with a more satisfying experience. As it is, it’s an intermittently satisfying pop album and not enough of a country album.