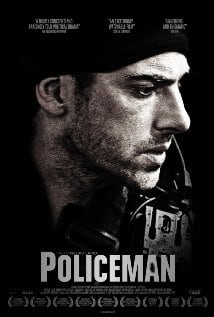 [xrr rating=4.0/5]We meet the villains of Policeman nearly an hour into the film, a group of young radicals drafting a manifesto about their grievances with Israel’s socioeconomic inequality. As they read the document aloud, they begin making corrections and amendments, specifically cutting references to Palestinians and quotes by Theodor Herzl. This pruning could symbolize the crafting of the film itself: instead of making yet another movie about Arab-Israeli conflict or the nation’s history, Policeman focuses on the domestic issues frequently omitted from Israeli films that tour the festival circuit.

Even the policeman in question, Yaron (Yiftach Klein), is rarely seen doing cop work. A member of a counterterrorist unit, Yaron spends most of his time awaiting the birth of his first child, as well as fretting about the health of comrade Ariel (Gal Hoyberger), who awaits diagnosis of a brain tumor. The film even skips over an actual assignment, cutting over a raid to then get stuck in an internal investigation after the fact as supervisors deal with the collateral damage of a hit on a terrorist and the team decides to make Ariel the fall guy since no one will put him on trial in his condition. Ariel reluctantly agrees to this, but the editing prioritizes the subtle shift this marks in the team’s relationship over an action sequence.

That structural quirk typifies the decisions Nadav Lapid makes in his feature debut, belatedly seeing release after first playing festivals three years ago. He frames interactions between Yaron and his pregnant wife performing prenatal exercises and massages with a kind of detached eroticism redolent of Godard’s late-period treatment of women, filled with symbolism of feminine imagery but also an objective account of a woman’s body that is more sensual than sexual and bereft of male-gaze close-ups. And even when a long shot facing the couple perpendicularly rotates 90 degrees and moves into an over-the-shoulder shot from behind the wife staring through her parted legs as the shirtless Yaron rubs her buttocks, the topic of conversation switches to Ariel to maintain the sense of remove. Elsewhere, Lapid shots angled interiors through doorways with the kind of naturalistic melodrama of Fassbinder, wringing psychological conflict from the frame with neutral backgrounds. This angling particularly comes into play when one of the radicals, Oded (Michael Mushonov), comes into conflict with his politically sympathetic but concerned father (Menashe Noy) and their disagreement spills out into the frame.

Lapid shoots like someone with a lifetime’s experience. Policeman is one of the few films made in recent years, debut or otherwise, that gives the impression that every single shot exists to add narrative, character and/or visual information, not just to provide coverage. This allows him to communicate a great deal without words: when Yaron accompanies Ariel to the hospital for his exam, the camera stays with him in the lobby as Ariel goes back to his room, the nervous energy of the cutting not only a reflection of Yaron’s concern for his friend but his anxiety over making sure Ariel will agree to be the unit’s scapegoat. When Ariel emerges from the test, a shot of him standing silently against a wall and a reverse shot frame his face in an off-center close-up angled in such a wall that the hallway walls behind him seem to merge, trapping the man as he processes news he does not need to voice.

A pullquote from some accompanying press material for the film makes Godard and Fassbinder comparisons as well, but it also throws in Michael Haneke as a reference point, a connection that is understandable but suggests a tone of irascible finger-pointing that the film lacks. It does have a satiric bent, mind you: the radicals talk big about tearing down society, yet when one of them asks Shira (Yaara Pelzig), the young woman whose home they meet at, if he can smoke, she replies that her parents, who own the house, are allergic. Later, when she and the rest kidnap a billionaire and his family at his daughter’s wedding, the short, plain woman tries to confront the statuesque, tanned bride and intimidate her, the sight of her craning her neck upwards to deliver invective is so ludicrous that even surrounded by guns, the daughter unleashes her own castigation without fear. Even Yoran, seen as a loving husband, has a scene that puffs up his macho posturing, when he hits on a young waitress still in braces and tries to seduce her with his gun. He asks how old she is, and she replies that she is 15. “Why,” she asks, and the frame amusingly smash-cuts to Yoran now caught up with his departed friends.

Lapid even slowly incorporates the kind of commentary that the film initially bucks. The radicals’ kidnapping leads to Yaron’s unit being called in as a counterterrorism outfit, and the policeman is obviously dismayed, even confused, to find that the targets are domestic Israelis. His superiors, however, are so set in their responses to any such threat that they do not hesitate to map out a strike that never considers taking the young criminals alive. It is here that the film skirts Haneke—the unit’s commander even refers to the billionaire as a “pillar” of the country in an on-the-nose statement about who police really protect—but even as a potential thriller ends swiftly with the response of well-trained Israeli defense forces, Policeman is not an angry film about the nation’s state of uncompromising enforcement and misguided but passionate youth. Instead, it regards Israel’s with a sadness that begs for an answer, not a sneering judgment of failure. It announces Lapid as one of the most interesting new filmmakers working, and hopefully his second film, The Kindergarten Teacher, will find its way from festivals to proper distribution faster than its predecessor.