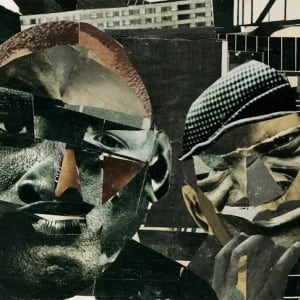 [xrr rating=4.0/5]It may be a backhanded compliment to call The Roots one of the most professional groups in music today. Exceptionally gifted musicians, they have played together long enough to operate as an airtight unit. Whereas grit and street cred are core values of hip-hop, these guys work for corporate America. Their regular gig on “The Tonight Show with Jimmy Fallon” has made them wealthy, but it has not made them complacent. In a long career full of many highlights, their most recent albums hold up to career heights like Things Fall Apart and Phrenology. Their 11th LP, … And Then You Shoot Your Cousin, continues this winning streak.

Audiences have come to expect certain things from a Roots album: excellent production values, an ambitious, yet accessible artistic vision from Questlove, honest, mature rapping from Black Thought and a tight, jazz and funk-inflected groove. But the group has been able to shake up this formula enough on each album to keep it interesting and adventurous. … And Then You Shoot Your Cousin is above all a mood piece, a concise exploration of mortality and violence in America that contains less rapping and more moments of pure, abstract sound.

Four minutes of the album’s brief half-hour running time consist of “found” audio snippets that contribute to the album’s haunting, melancholy tone. The disc starts with Nina Simone singing the theme from the film Middle of the Night. The angular melody, dissonant background strings and Simone’s nervous, vibrato-laden voice establishes a menacing presence that continues with Mary Lou Williams’ “The Devil,” an excerpt that ends with the telling lyric, “The devil looks a lot like you and I.” A snippet of experimental music, Michael Chion’s “Dies Irae,” pushes the Roots into the Beatles’ “Revolution 9” territory, its moment of sonic chaos reinforcing the record’s themes of death and desperation.

Between the found audio samples are the centerpieces of the album, the original Roots compositions that make … And Then You Shoot Your Cousin such an intriguing, bold record. “Black Rock” begins with a sample from the band BlackRock’s [ed. Note: space is correct in song title, no space correct in band name] “Yeah, Yeah.” It’s a mixture of a repetitive piano line, rustic guitar riff and tom-tom heavy drum pattern. Black Thought and frequent Roots collaborator Dice Raw alternate verses about such urban maladies as fast food for breakfast and a “bullet in the head.” It’s a sad existence, but, as Dice Raw sings, “Until then I make a place in this world/ For me and my baby girl.”

The themes of existential angst established on “Black Rock” are intensified on the album’s best track, “Understand,” which takes the theological questioning of How I Got Over’s “Dear God” a step further. Black Thought and guest Greg Porn rap speculative verses about the afterlife and wonder how a good God good could let so many screwed up things happen in today’s world. Serious religious observations (“People ask for God, ‘til the day comes/ See God’s face, turn around and run/ God sees the face of the man/ Shaking his head, says, ‘He’ll never understand’”) stand alongside playful musings (“I pray all dogs go to heaven/ Or to a new hell with a Wi-Fi connection/ So I can pay for my sins on PayPal/ Or own a holy ghost, a greyhound.” This combination of sincere philosophy and dark humor recalls tunes like “Diane Young” and “Ya Hey” from last year’s Vampire Weekend masterpiece Modern Vampires of the City.

As the album nears its end, tracks like “The Dark (Trinity)” and “The Unraveling” continue the social and religious critiques with satirical elements. The gentle ballad piano progression that ends “The Unraveling” leads to the bright gospel of closing track “Tomorrow,” a tune associated with rap only by virtue of appearing on a Roots album. Raheem DeVaughn sings, “Everybody needs an angel/ And everybody needs to smile/ And everybody has an angle/ And everybody wants tomorrow right now.” While the optimism in this verse isn’t as absolute as in most gospel songs, in the dark, chaotic world the Roots have depicted, this is the best anyone can do. You have to keep smiling and doing what you can to make this world a better place. This is exactly what the Roots have done over the course of 11 superb records. Here’s hoping for 11 more.