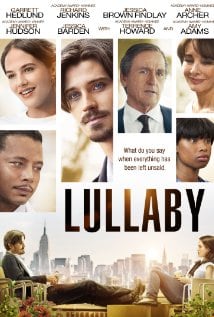 [xrr rating=2.5/5]Garrett Hedlund is already dangerously close to being typecast as the chain-smoking drifter chasing his vaguely defined dreams. After putting himself on the map with Tron: Legacy, Hedlund proved himself a capable leading man in the 2012 adaptation of On the Road with a strong performance as Dean Moriarty; he followed that up with a small but memorable supporting role as the driver in last year’s Inside Llewyn Davis, telling the titular character that he is “all out” of cigarettes before lighting one up for himself in the next scene. In his latest, Lullaby, Hedlund is again the leading man and is introduced smoking in the lavatory of an airplane and subsequently smooth-talking his way out of trouble, making good on those Brad Pitt comparisons critics made after On the Road.

Hedlund plays Jonathan, an aspiring musician who turned down a free education at NYU to chase his dreams, much to the chagrin of his family, particularly his cancer-ridden father and sister Karen, the “favorite” who stayed near home and made it to Yale law school. Hedlund is a good fit for the role, charismatic yet smug, always leaving open the possibility that he’ll let you into the heart he insists to his ex (Amy Adams) “is a muscle” that just “pumps blood.” Even stronger, however, is Richard Jenkins as the patriarch who insists on having life-support cut off to end his suffering, a decision which initially causes Jonathan to scream but is very soon-after treated with sympathy that mother and (especially) sister cannot find. To make matters worse, he has even given away all of his savings, money that both Jonathan and Karen expect, because he “raised a couple of spoiled brats.” Jenkins’ performance contains a refreshing and true mix of humor and headiness, setting up punchlines in genuinely unexpected ways while never letting his patriarchal authority slip, even when the character is open to the voices of others.

Often times, Lullaby hits the cliché notes that one would expect: Disappointments are recounted, old grudges resurface, sibling rivalry kicks into high-gear, one person or another feels slighted, notions of tradition (in the form of religion) are questioned, and Jonathan finds sympathy, understanding, and kindness thanks to Meredith (Jessica Barden, who elevates a stock caricature in precisely the way the film needs), a quick-witted, seemingly steadfast terminally ill 17 year-old in the same hospital. There are a few twists and turns in Jonathan’s arc, as well as a few scenes that stand out and prevent the film from falling into schmaltz, however: when the extended family shows up, director Andrew Levitas finally finds a smart use for the point-of-view shot, distorted lenses, and mounted cameras that serve largely as distractions throughout the film, particularly in the film’s beginning. Later, a Passover Seder provides much-needed laughs and cuts more directly to the heart of characters without dressing it up in spectacular arguments, a much-needed departure from the signpost-wielding dialogue that dominates many other scenes.

On the whole, however, spectacle is precisely what Lullaby aims for. In addition to Levitas’ aforementioned overwrought visual choices, there are no shortage of tear-jerking scenes, so the film’s political text—about the morality and legality of assisted suicide—is so muddled as to become a plot-device rather than an ethical quandary at the center of the film. Even when the film is forced to take a stance, it does so only after a bold rhetorical monologue, and adds a post-script of a musical performance (Hedlund does his own singing, as he did in 2011’s Country Strong) as if to soften the blow. Elsewhere, Jennifer Hudson is trapped in the “sassy black woman” stereotype, made doubly bad because the family shares a laugh at her expense to provide the first hint of reconciliation. The tears, meanwhile, are unearned; for the most part, we have seen all this before, and even good performances in key roles can’t shake the feeling of familiarity or prevent the nagging feeling that manipulation is an end rather than a means to some bigger revelation.