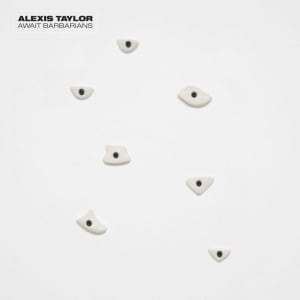 [xrr rating=3.75/5]Await Barbarians, the second solo LP from multi-instrumentalist Alexis Taylor, arrives on the back of a wandering chord. Taylor isn’t in a rush to correct the harmonic dissonance; he simply allows the relationship to find its own route through lyric-less opener “Lazy Bones.” This type of aural discomfort plays out across the album’s 12 tracks; from the industrial stutter that lines the innocent bliss of “From the Halfway Line” to the muted hi-hats/staccato bass pairing that pulses through the synths of “Immune System” and analog fuzz in the background of “Dolly and Porter,” there is always a new distraction to pull the listener back into his pitchy serenades.

As a vital member of UK’s dance-pop collective Hot Chip, Taylor has already established a firm base of colorful indie club kids (some now turned adults) over the last decade. For all the energetic spontaneity with Hot Chip favorites like “Over and Over” and “Ready for the Floor,” this collection of songs treats fans to an equal amount of thoughtful reflection. “Piano Ducks” and the seemingly Darth Vader-featuring “New Hours” are so beautifully barren that they seemingly escaped from Taylor’s core of artistic whimsy in a single take.

However, Taylor has abandoned all of his synth tactics. Instead of utilizing his proficiency in wonky electronics to get festival crowds grooving, he is now crafting inspiring statements on adulthood. Lead with an escalating waveform, “Closer to the Elderly” finds the aging Taylor reminiscing about that unavoidable process: “The older I get the younger I seem to be/ The older I get the closer I feel to the elderly/ When I was one I had to crawl but within reach/ I opened my eyes and headed out for the beach/ When my back aches now I crawl down to the sea/ They say the salt water is a cure for any disease.” Initially perplexing, the statement builds into a profound statement on growing old: the more one experiences the more opportunity for continued discovery. While Taylor might feel closer to the grave than the cradle, he is still focused on new knowledge despite the minor aches. As an artist, this type of continued rejuvenation is a must, and Await Barbarians is certainly not short in artistic evolution.

While many of the former DFA artists have stuck fairly tight to their nu-disco roots, Taylor is establishing a similar trajectory as Beck. With a discography that spans over 20 years and 12 releases, Beck has never felt trapped within a scene or his own success. This journeyman mentality hasn’t pushed fans away; Beck’s current sold-out Morning Phase tour indicates the opposite. Taylor might have started his career as an indie-dance favorite, but by continuing to hone his songwriting craft and abilities across multiple instruments, he has earned the respect to release tracks with wide-ranging influences. Without the pressure of producing another Hot Chip hit single, Taylor has revealed a personal, even more quirky side of himself that will only go onto aide the growth of the larger outfit as well.