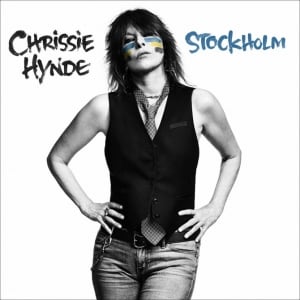 [xrr rating=3.75/5]It’s kind of fitting that the best Pretenders album of the last decade is Chrissie Hynde’s new solo album, Stockholm. That’s not a cheap shot at 2008’s Break Up the Concrete, the sole competition for that award, but where Concrete dug deep into blues, rockabilly and early rock, Stockholm largely returns to the Pretenders’ classic sound. Back in the day, Hynde and the group infused the radio with a refreshing mix of rock, new wave and power pop. They paired her expressive voice with the tight chop of a Stratocaster to create a string of hits that could rouse rebellion, slink into a sultry mood or move hearts. Although she always emphasized that the Pretenders was not just a backing band, her singing was always ascendant over the music. While that remains the case on Stockholm, releasing this as solo album may just be an acknowledgment of the tensions between Hynde and the band. That last Pretenders album notably did not include long-time drummer Martin Chambers, although he toured with them afterwards. A solo release provides some distance from the politics and personality conflicts and, ironically, lets Hynde sink deeper into her strengths as a performer.

The best thing about Stockholm is that it proves that Hynde still has the same vocal and emotional power she had in her prime. Those early releases built on the unique ground she claimed, somewhere between Blondie’s new wave coquettishness, Joan Jett’s tough girl snarl and Patti Smith’s poetic depth. The new album works a lot of those facets with a set of fairly short, focused tracks that get their punches in and then step aside for the next song to take a turn. The 11 tracks don’t quite make it to 38 minutes, so the time passes quickly, but most of the tunes have something worthwhile to impart.

Stockholm opens with a nod to Break Up the Concrete’s retro sound with a slow burn, Phil Spector-style ballad, “You Or No One,” but it really begins with the second song, “Dark Sunglasses.” The pensive, new wave verses take elements of early tunes like “Private Life” (Pretenders, 1980) and “My City Was Gone” (Learning to Crawl, 1984). Hynde is sharp and sarcastic, dissecting her target with clinical precision, “And you’ll remember/ How good it tasted/ Inside the ruling classes/ Wasted, behind your dark sunglasses.” The backing vocals and the R&B pop edge to the chorus remind me a little of Annie Lennox and the Eurythmics, but the layers of guitar – staccato slashes against a relentless arpeggio riff – resurrect fine memories of Hynde and Pretenders’ guitarist Robbie McIntosh in tight formation.

A couple of songs later, “Down the Wrong Way” takes the gloves off and lunges forward with a raw wrench of electric guitar. I hadn’t read the liner notes in advance, so it was particularly sweet to immediately recognize Neil Young’s distinctive playing. The warm fuzz of his Fender Deluxe and his ringing tone fit perfectly into the low-fi grind of the tune. The sound is ragged, but Hynde effortlessly slides from sneering post-punk to power pop. The opening line, “I’ve become what I criticized/ The porn queen in my deck of lies,” is an uncompromising bit of self-analysis, but her taut innuendo opens into a weary sigh of jaded experience that tempers a defiant streak of bruised yearning. This is what she does best: project a deep vulnerability that lurks behind a tough protective shell. It’s the strongest track on the album in large part because of Young’s contribution, which adds the undercurrent of desperation that drives the tune. It ends with a thick cloud of reverberations that rolls away like fading thunder or the repercussions of a string of bad decisions

While nothing else gets as down and dirty, Stockholm still has a couple more tricks to play. “In a Miracle” contrasts moody musing delivered in a lush Karen Carpenter vocal tone with a bridge that soars with hopeful highs. The see-saw between doubt and inspiration provides the album’s emotional heart, even as it ends in a question that offers no resolution.

The other standout is a dark outlier, “Tourniquet.” This is more like a theatrical tune from a musical; think Streisand or Midler, but more restrained, or perhaps an introspective Patti Smith piece. It’s a kind of opium dream, where each line or couplet could serve as a panel in a graphic novel, and, fittingly, the instrumentation is completely different, with classical guitar, music box chimes and a faint whistle accompaniment. Hynde’s voice is captivated by obsession and she infuses the two and a half minutes with a rich web of darkness and codependent themes. That tourniquet could be bandage or bondage – both are implied. She takes a big chance by including this song; it’s stark and revealing in a unique way. That risk almost pays off. Unfortunately, the hypnotic power is sabotaged by the track order. If it had been followed by “Adding the Blue,” the lazy beat and heartfelt poetic lyrics would have melded smoothly to close the album. Instead, Hynde splits the two with “Sweet Nuthin’,” which breaks the mood like a splash of cold water and comes across as more lightweight than it deserves.

That’s not a fatal error; it’s easy enough to swap “Tourniquet” and “Sweet Nuthin’” in the play order and salvage the moment. Once that distraction is removed, Stockholm accomplishes its purpose and shows off Hynde’s skills as a timeless performer.