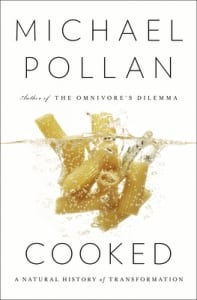 [xrr rating=3.0/5]Humans are the only animal that cooks its food. Moreover, humans are the only animal that has evolved to the point where cooked food is necessary for our survival, raw food faddists notwithstanding. We’ve also reached the unflattering point where many of us spend more time watching food being cooked on TV than we spend preparing food for ourselves and our families. The definition of “cooking” has devolved over the past few generations from concocting elaborate homegrown meals to opening various packages and assembling processed food-based substances into flavorful caloric delivery systems. With cooking for oneself no longer obligatory to our species and instead largely one of many daily tasks outsourced to corporations, there’s both a reactionary and progressive element to cooking from scratch. Simply put, at this unique juncture of our evolution and culture, choosing to really cook is both transcendent and primal.

Famed food writer Michael Pollan’s latest tome, Cooked, acts as a simmering meditation on these truths. Best known as the author of The Omnivore’s Dilemma, Pollan brings the sociological, anthropological, philosophical and even religious aspects of cooking to the table. He cleaves his book into four parts, mirroring the traditional four elements of Fire, Water, Air and Earth. With each section, he oscillates between the more abstract and historical components of that particular cooking approach and the specific chronicles of his experiences studying those culinary methods with some of the world’s most cutting edge practitioners.

The only truly compelling account of his hands-on endeavors takes place in part one. His vivid description of his experiences stoking the coals of authentic whole hog Southern barbecue (and all the argument about what “authentic” entails) is fascinating and somehow mouthwatering even to this pescetarian reviewer. You see, with well-cooked food, there’s more than simply satiation at stake. Looking more closely, cooking (especially roasting meat over an open flame) is a marriage of the sacred and the profane, an amalgam of millennia of tradition, culture and biology. There’s even a historical gender difference between cooking over flame and cooking in a pot; men typically helm barbecues as they did ritual slaughters in olden days while women have been relegated to the less glamorous stirring duties. This went so far as to lead to KFC billboards in the ‘70s proclaiming buckets of fried chicken as a kind of women’s liberation from the kitchen.

Pollan’s more abstract ruminations are far more interesting than his specific attempts at cooking. While the barbecue portion is fascinating, large sections devoted to the intricate details of him trying to bake the perfect loaf of bread or enduring an awful month-long stench to achieve the most delectable sauerkraut prove nearly as tedious as the processes themselves. In each section, he raises fascinating points—with the overarching theme that various methods of cooking have led humans, until recently, to learn ways to maximize nutritional intake while minimizing the energy exerted to digest—but he often chews on the details too long to maintain the reader’s interest. Cooked could have easily been two or three different books; Pollan simply covers too much ground.
But for the patient reader who is willing to skim through the sections outside their particular area of interest, there’s much to be savored here. The section on fermentation, in which Pollan argues that living bacterial cultures may be one of the more crucial aspects to our health and wellbeing, is spellbinding and not only because of his argument that alcohol is important. He highlights our relationship with bacteria over the past 100 years pointing out that we’ve perhaps gone so far to avoid disease that we’ve actually made ourselves more susceptible to it. Meanwhile, he delves into both sexual and religious overtones in his examination of bread-making.

All in all, Cooked is yet another strong work from a food writer who has done much to change the way we look at the stuff we put in our mouths. His examination of how corporations have recently begun stripping food of its nutrition (a first in the evolution of cooking) in order to maximize profit isn’t necessarily groundbreaking, however. And there’s something disingenuous about a man who is lucratively paid to write about food studying with the best in the world in order to prepare hugely time-consuming dishes, only to then condescendingly chide everyone else for not carving out enough time to cook. Pollan points out problems without offering any practical solutions. But if you don’t mind trimming away the fat, Cooked offers a robust portion of food for thought.