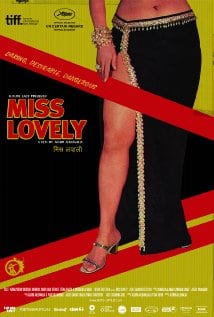 It opens with what you imagine are the coming attractions intros of a Mumbai grind house. Rhythm guitar, cheesy synths and blaring Bollywood horns play as colorful geometric graphics spin across the screen, broken now and then by amorphous shapes. This is what celluloid looks like in all its glories and flaws, a look distinct and wonderful and unforgettable. If this were a movie by Quentin Tarantino or one of his acolytes, you would be instructed where to put your air quotes and prepare to watch an ironic pastiche of yesterday’s cinema that’s exploitive, if ironically so. But Miss Lovely‘s blend of art house and grind house owes more to Wong Kar-wai than to Roger Corman.

In the movie’s first scene, a theater runs a worn print of an Indian horror movie, its villainess a red-eyed demon. But the projectionist is impatient. Then comes Sonu Duggal, with a fresh load of film reels. The projectionist shuts off the machine to the groans of his customers but when he puts on one of the skin flicks that Sonu delivers, the audience soon voices its approval. The director shows us a bit of skin before focusing on the audience members, grizzled, Everyman faces.

For moviegoers, it’s about the love of film stock, even in a compromised state. I’d watch a ratty film print over a DVD any day—one of my favorite repertory screenings was of a print of the ABBA movie that had not only faded to pink but had developed a mottled blotch that ran through nearly every frame, adding a patina of decay to the story of the Swedish superstars as if a commentary on the fleeting nature of fame.

But I digress, and in a way that these characters could care less about. From the grateful expressions of the audience members, the camera cuts to the theater owner counting money. They’re not in this for the love of cinema, but to make a rupee. Those fresh, soft-core reels came from the Duggal Brothers, exploitation filmmakers who try their hands at distribution and run afoul of industry heavies who don’t want anybody moving in on their territory.

Director Ashim Ahluwalia wanted to make a documentary about the Indian exploitation movie industry. What he ended up with is a hybrid, an art-film that is an indictment of exploitation while at the same time reveling in it, that is a paean to analog moviemaking in a time when the world is going digital. The movie is full of analogue artifacts: a Steenbeck editing deck, rotary telephones, massive projectors with steel film reels, movie lights that snap and crackles with an overloaded electric charge that lights up an outdoor forest set as if the cinematic dream were a nightmare.

If the Duggal brothers have different ideas about making movies, sometimes it seems the director is divided himself. His art house instincts sometimes resort to exploitation tropes like cat fights and brutal violence. The camera gazes at a woman’s breasts at one moment, then turns to Sonu, eyeing a sculpture of Shiva, the Hindu goddess of fertility typically depicted as buxom. Do T&A movies fill a spiritual void, or speak to that void?

Miss Lovely is not an Indian Boogie Nights, its pacing slow despite the decadent lifestyles of its characters. Its mix of art house love letter to celluloid and volatile melodrama isn’t always successful, but even when the script flags, the Super 16 and 35mm cinematography by K.U. Mohanan is there to carry the director’s ideas.