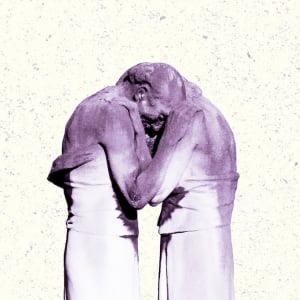 [xrr rating=3.75/5]The Antlers have come an awful long way since 2009’s Hospice. Evolving from a bedroom project to a really good band, they’ve added musical sophistication to their already canyon-deep emotional resonance. Yet, there likely won’t be an article written about them that doesn’t include some kind of nod to that breakthrough record. With a cancer patient on her deathbed and her nurse functioning as central characters, Peter Silberman came at the common theme of love and loss from an absolutely heartbreaking perspective, and nailed it. The writing, not to mention the subject, doesn’t get much more powerful. But it’s also a record that sounds like a lot of others, from a band that hadn’t yet even formed, let alone found itself.

With multi-instrumentalist Darby Cicci and drummer Michael Lerner on board permanently for 2011’s underrated Burst Apart, the band created dimension, developing a sound as distinct as Silberman’s austere prose. No one on that record was terminally ill, but Silberman’s writing wasn’t any less poignant in its ability to capture the heavy, though it wasn’t near as easy to latch on to. With Familiars, the Antlers have scaled up the sonic isolation of Burst Apart with a narrative from the vantage point of someone getting older, someone caught between who he is, who he was and who he wants to be. It might not be as sad of a record as we’ve come to expect from the Antlers, but it’s certainly sadder sounding.

The effectiveness of Familiars is undoubtedly in its layers, with Cicci’s textures and Silberman’s desolate guitar coming together to build sprawling, symphonic hymnals. The electronics introduced on Burst Apart are still there only they don’t feel as upfront and leave plenty of breathing room. Tracks move slowly but steadily, passing through various emotional stages marked by psychedelic keyboard and piano overtones, syncopated guitar strums, subtle production and vocal shifts. “Palace” starts with soft, ballad-y piano, gentle atmospherics and sad, funeral-like trumpet before finishing with a soaring, cinematic crescendo of an ending. Cicci’s aching trumpet plays a central role across Familiars, adding weary flourishes to tracks like “Surrender” and “Doppelganger,” with the latter featuring jazzy brush strokes, bleeding keyboard droplets and Silberman’s plucked, hollow chords and blues-y fills. But it’s “Intruders” that might be the most musically satisfying of the bunch, as Silberman’s slinky reverb-soaked guitar screams in isolation at his demons while Cicci’s acid-y Rhodes passages recall Kid A Radiohead.

For as elegant as the Antlers have become, Silberman’s voice and words will always be the critical focal point. Here he sings less as a storyteller and more as a man in the middle of turmoil, it’s make-or-break time and we’re right in the thick of it with him. Disconnection is a common theme Silberman returns to, whether wanting to become someone new but not being able to escape the past or struggling to identify with the stranger reflecting in the mirror and his ugliness inside. “I rent a blank room to stop living in my past self” he sings on “Hotel” before finishing with Mayfield-esque falsetto, while during “Director” he watches someone else run through the motions of life, getting further and further from themselves. But for all the associations with being a downer band, Familiars concludes with two fairly optimistic tracks. With its soulful, ringing progression, “Parade” is as celebratory and accessible as the Antlers get, as Silberman finds light at the end of the tunnel, while “Surrender” sets the goal of finding peace and refuge. “I’m getting ready for when everything is wonderful” he sings during the former, folding and expanding his voice on command to new extremes from falsetto to croon. Familiars truly establishes Silberman as the pace setter for vocal range in indie rock, charting extremes as wide as Jeff Buckley, Hamilton Leithauser and Daniel Rossen in one package.

Maturity is a touchy subject in the music world. Too often it’s associated with losing one’s edge or it’s a go-to theme when there’s nothing else to write about. In cases like the Antlers, who came out of the gate with such a watershed record, it’s almost as if we won’t let them grow or evolve. But this band isn’t about change for the sake of change, or surface appearances. They explore reality, and few bands have better captured the inner workings of what it’s like to age in an era of disappointment in one’s self and each other. They might not break our hearts as they once did, but they can still break our spirit and put it back together again, which is a pretty powerful thing.