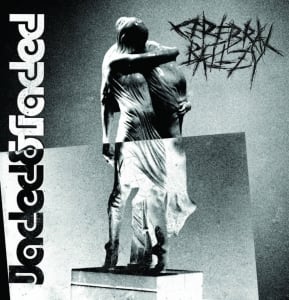 [xrr rating=1.25/5]My first experience with Cerebral Ballzy was in May 2012, when they were given the unenviable task of opening for the reunited Refused at one of their tour dates in New York City. The antsy crowd, many of whom were probably seeing Refused for the first time, didn’t seem to want to give Cerebral Ballzy the time of day, and the band responded in kind with a sloppy performance that served as a middle finger to a crowd that didn’t want them. It was a terrible first impression to say the least, but it was keeping in line with the band’s reputation of not only being hated, but daring audiences to hate them. Perhaps it was that brash, fuck-everything attitude that drew Julian Casablancas to the band when he made Cerebral Ballzy a marquee signing to his new Cult Records imprint, but if Jaded & Faded proves anything, it’s that attitude can only get you so far if you don’t have the songs to back it up.

Everything about Jaded & Faded is in shambles; it sometimes seems as if the band’s instruments are held together with duct tape. They may actually need it, given that their default mode is to rhythmically bash on things and see what happens. Other than that, there isn’t much to the songs here. The band have an idea of what punk is supposed to sound like, but they can’t seem to find a compromise between tight, New Wave-inspired punk-pop and straight hardcore, so they just mesh the two together most of the time. That in of itself is a pretty bad idea, actually, but Cerebral Ballzy make things worse by doing nothing other than shifting styles mid-song. There’s no care taken in how these songs were written or put together; it’s as if everyone involved just said “fuck it” and hoped for the best.

Then again, there are plenty of punk bands who never gave a shit about musicianship, but they managed to pass muster with charisma. Unfortunately, that burden falls on singer Honor Titus for the entirety of Jaded & Faded, and the guy just isn’t up for the task. Lyrically, Titus writes in such a way that it’s easy to see what drew Casablancas to him; they both have a penchant for writing cool, detached odes to city living. Of course, Casablancas can actually sing in a cool, detached manner; Titus just sounds annoying, like a teenager who desperately wants you to pay attention to him not caring about things. His nasally delivery undercuts the aloofness of his own words, and it only serves to make Jaded & Faded into even more of a mess.

I’d probably be nicer to Cerebral Ballzy if they were releasing this on their own as a cassette or something, but Jaded & Faded was supposedly worked on by professionals. Dave Sitek from TV on the Radio produced this; so did David Kahne, a former Warner Bros. executive who produced the Strokes’ worst album. (Not that they helped; their washy, reverb-laden production only serves as a reminder to punk bands that guitar compression is your friend.) The fact that they, along with Casablancas, put so much effort into getting this band to make this album happen is astounding. They’ve given Cerebral Ballzy a bigger platform than they ever could have hoped for, and the band’s response is a recorded middle finger to anyone who would have the nerve to want to enjoy listening to music. I guess they’re pulling a prank, but it’s a childish one at best.