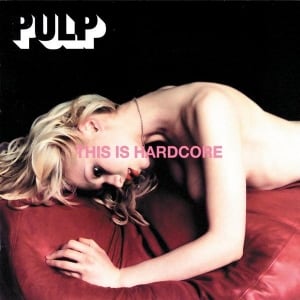 Compilation albums have a funny way of homogenizing the finer details of an artist’s career, often making wildly different albums fit into one stock image of their musical identity. Pulp’s 2002 collection Hits is as comprehensive and successful as this kind of compilation can be, succinctly highlighting the uniformly first-rate recordings Pulp released on Island Records throughout the ‘90s. Hits also obscures the dramatic differences between This Is Hardcore and Pulp’s other major-label records, most notably the career-defining Different Class and its string of singles and awards in the UK.

Released in 1998 as a highly anticipated follow-up to 1995’s Different Class, This Is Hardcore is a considerably darker album than its multi-platinum predecessor, and directly confronts the ramifications of Pulp’s sudden fame and success. Going into the mid-’90s, Pulp had released three albums of material that only hinted at how skillful the band would become, and they garnered little public attention. Fueled by some of Britpop’s catchiest material and a lovably disenchanted blue collar mentality, Different Class finally made Pulp a household name in the UK, but also presented wry frontman Jarvis Cocker with a traumatic cocktail of lingering resentment, drugs and soaring expectations. Pulp also coped with internal conflict, culminating in the notable departure of guitarist and violinist Russell Senior; Cocker left for New York alone to decompress and write in isolation from the rest of the band.

These new songs traded most of the class-conscious humor for bleak, sometimes disturbing topics, considering Cocker’s career disillusionment and impending middle-age with a lyrical microscope instead of resigned laughter and a wink. Even though This Is Hardcore ends on a brighter note—“Glory Days” looks up a bit before the surprising optimism of “The Day After the Revolution”—the album’s introspective maturity doomed it to fall short of commercial expectations (while making it an album Pulp’s aging fan base can more readily appreciate today). This Is Hardcore also features some of Pulp’s most ambitious songwriting, varied textures and lush arrangements demanding more time and attention to connect than the pop riffs of the band’s earlier work. Combined with Cocker’s incisive wit—one that generates lyrics as surprisingly honest as they are direct—those darkly jaded songs make This Is Hardcore a wholly different experience from any other Pulp album to date.

Opener “The Fear” makes those differences immediately obvious. Early on, there’s what sounds like a damning mission statement: “This is the sound of someone losing the plot/ Making out that they’re okay when they’re not/ You’re gonna like it, but not a lot.” A song about the raw psychological edges of excessive drug use, “The Fear” sounds as alienating and uneasy as its lyrical content. Crawling along with unrelenting momentum, its ominous guitar and warped buzzsaw instrumentation explode into a haunting choir-backed refrain that swells dangerously before cutting back to another panicked verse.

The title track is the album’s most creative and dramatic moment, Cocker’s voice a lecherous presence among the song’s sinister lurch and sleazy orchestration as black and shiny as an oil slick. “Seductive Barry” also invokes images of noir film and misguided liaisons, but the unmasked debauchery laced in “This Is Hardcore” takes the song’s disconcerting lounge piano and cabaret trappings to a very ugly place. Later on, Cocker faces the accelerating creep of age (“Help the Aged”), a beautiful woman attracting suitors only interested in her as an accessory (“Sylvia”) and an abusive husband telling his son, “Everybody’s telling me you look like me/ But please don’t turn out like me.” This Is Hardcore also reinforces Pulp’s genius for hiding dark themes inside of upbeat, contrasting musical backdrops, including the dance-ready strobe of “Party Hard” and the soaring melody driving “TV Movie.” It’s a maneuver Cocker does as well as anybody, a skill Pulp also mastered in their music videos.

While Different Class will remain the masterstroke album that most defines Pulp’s career in the public consciousness, the Mercury Prize nominated This Is Hardcore merits just as much attention and critical praise. The raw vulnerabilities on display throughout This Is Hardcore are uncomfortable—in some ways the antithesis of the cultural empathy that made Different Class a hit—but also redemptive as Cocker explicitly exorcises his demons one by one. The challenging style of these recordings succeeds in the same way; newly added distortion, layered orchestration and powerful dynamics make for a sound rarely as welcoming as the baroque pop and dance of Pulp’s earlier hits, but it also makes the varied nature of these songs considerably more memorable. There’s a lingering appeal to a guy as astute as Cocker singing about household chores (“Dishes”) and the difficulties of fatherhood, while scoffing at those clinging desperately to adolescence long after its gone (“Party Hard”). Instead of making another Different Class for an easy hit, Pulp started from a disheartening place of anxiety, tragedy and self-critique, faced an array of fears head on and recorded an album that stands up among their best work.