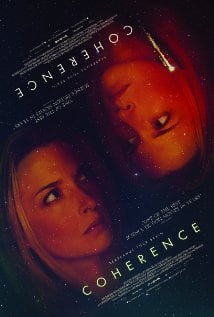 [xrr rating=4.25/5]A rare celestial event causes a series of strange occurrences. This flimsy premise becomes a compelling examination of interpersonal dynamics, self-identification and the illusion of reality in Coherence, the latest from writer-director James Ward Byrkit. The film’s first act seems hardly notable, opening with a photogenic and homogenous group of friends gathered for one of their semi-regular dinner parties. Friends dole out the requisite kissy-cheeks and small talk until the evening’s antagonist arrives, a dark-haired dragon lady whose mere presence threatens all assembled to varying degrees.

But it’s also the night of Miller’s Comet, and even before all the guests arrive, strange things happen: a cell phone screen shatters for no reason; personalities shift almost imperceptibly; a second cell phone cracks in the same pattern as the first. Intrepid Googler Em (Emily Baldoni) finds out startling facts about Miller’s Comet that worry the guests. They’re easily distracted, though, with bits of gossip, catching up with each other and Beth’s (Elizabeth Gracen) moments of pseudoscientific woo. Soon, raven-haired vixen Laurie (Lauren Maher) begins to step on toes, making the evening simultaneously interesting and aggravating.

Everyone here, whether they know it or not, looks for excitement via the struggles of others, whether by causing it, observing it, or trying to alleviate it. Their problems and concerns are the banal bickering of the bored bourgeoisie, at least at first. As we learn more about these friends, and as their situation goes from concerning to perilous, we become more interested in them. Their transition from giggling drunks using a power outage as an excuse to play with glow sticks, to intelligent and inquisitive adults willing to accept the nearly unacceptable, is downright optimistic.

The group is also lucky, especially Hugh (Hugo Armstrong), who stumbles across a book that explains quantum decoherence, the theory that multiple realities exist simultaneously, although we are only able to perceive one reality at a time. These realities coexist without incident, as long as they don’t meet each other. This is a good thing to know: the group has just discovered a house down the street is the same as their own, right down to the guests inside.

It’s then that the playful blurring of lines between reality and fiction that opened Coherence becomes fascinating, and what first seemed to be shallow soap opera drama between friends and lovers becomes complex with questions of identity. Laurie’s appears as a harbinger of something awful to come, which has as much to do with a love triangle as it does with the quantum disaster ahead. Our own memories and perceptions are tested just as those of the characters on screen, thanks to a tight and clever script and some terrific framing by cinematographer Nic Sadler, who utilizes a limited budget to great effect. Coherence is a frightening and exciting metaphysical thriller that forces us to reexamine reality both as it exists and as we perceive it.