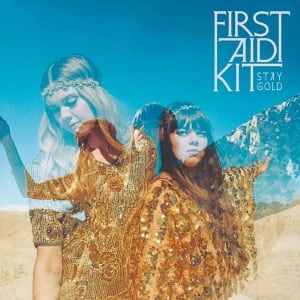 [xrr rating=4.0/5]Still in their very early twenties, the Söderberg sisters, Klara and Johanna, (aka First Aid Kit) have been steadily releasing albums for seven years. Starting in 2008 with the EP Drunken Trees, released on fellow Swedes The Knife’s label, First Aid Kit demonstrated their raw talents and love of folk. Now on their third full-length album and major label debut, Stay Gold, First Aid Kit’s sound has evolved into a mature, haunting folk that is all their own. From the darkness of The Lion’s Roar, Stay Gold is lighter, incorporating strings and elaborate instrumentation into their arrangements like never before. The overall result is a sound much more akin to pop than the rootsy folk they have become known for. But since the album has the backing of Columbia, First Aid Kit’s bid for wider appeal with this orchestral folk clearly worked.

As with The Lion’s Roar, First Aid Kit are back working with Bright Eyes’ Mike Mogis on this album. And while this is their first album to receive a major label release, it was still recorded independently before their distribution deal with Columbia. With the help of Mogis, the Söderberg sisters continue to hone their distinct sound and explore added instrumentation. This time, their recording sessions in Omaha were accompanied by a 13-piece orchestra to give their folk a full-bodied, majestic sound – a big change for a band which until now has produced their songs for a three-piece band. The influence of Mogis on First Aid Kit’s progression over the last three years is indicative of their career to date. At each turn, established artists seem to take them under their wing. They got their first record deal courtesy of The Knife. After releasing only their first album, Jack White brought them to his Third Man studios to record a single. And Conor Oberst, after hearing The Big Black and the Blue, introduced First Aid Kit to Mogis.

And while Stay Gold is ultimately more lighthearted than The Lion’s Roar, it doesn’t pull punches. First Aid Kit’s lyrics are just as heartbroken yet defiantly resilient as ever. Vocals still capture their characteristic world-weariness that pairs nicely with their distinct blend of country, ‘60s folk and indie rock. First Aid Kit’s lush new orchestration is on display from the very beginning in “My Silver Lining,” a track that revisits a familiar theme of “the road,” or in this case refusing to take the “easy road.” This song instantly recalls more pop-infused tracks from The Lion’s Roar but builds to such stirring heights with its sweeping violins and incomparable harmonies. And this first half of Stay Gold does seem to dwell on First Aid Kit’s concern over remaining relevant. First Aid Kit are well-known for referencing poetry in their lyrics. The reference to Robert Frost in “Stay Gold” is unmistakable, but here the duo put their own twist on “nothing gold can stay.” From the demand “Show me my silver lining” to the title track’s wish “for once we could stay gold,” it’s clear the sisters are preoccupied with their rapid success and the thought that it might disappear just as quickly.

Compared to previous releases, there is less variety on this album. “Cedar Lane” is a languid ballad with plenty of slide guitar, but there’s also the hint of ‘60s influence. And while the premise of “Waitress Song” – travelling to the middle of nowhere to become a waitress – may strike some as trite, it’s classic First Aid Kit. The addition of a direct quotation of Cyndi Lauper’s “Girls Just Want to Have Fun” shows the sisters’ more playful side. And the jaunty “Heaven Knows” is the clear successor to the rollicking “King of the World,” this time minus vocals by Conor Oberst. Closer “A Long Time Ago” marks a first for the duo: a piano ballad. The track sends the album out on a melancholy note.
Klara’s guitar – a staple on previous records – is frequently drowned out by all the added instrumentation on Stay Gold, only shining through on “Master Pretender,” “Shattered & Hollow” and “Waitress Song.” But to counter that, Johanna’s vocals are given significantly more room to develop. The two harmonize more than ever before on this album, making for a rich sound. Lyrically, however, Stay Gold does not have the depth of previous albums. Too many songs brood on familiar subjects: variations on leaving home and the big city (in their case, to escape to the country). “Shattered & Hollow” especially packages flat lyrics in uncharacteristic yet dramatic, atmospheric production. But it’s a testament to the music itself – the duo’s newfound, elaborate arrangements and their distinctive vocal harmonies – that they can make just about anything sound beautiful.

With Stay Gold, First Aid Kit confidently announce their intention to move beyond pure roots folk and expand their own audience while expanding the audience for folk-inspired music. The sounds of Americana are ubiquitous – slide guitars, banjos and mandolins – but are now accompanied by dramatic violins and cellos. But no matter what provides their backing instrumentation, First Aid Kit’s forte will always be their powerful vocals and entwined harmonies.