Placing Roman Polanski within the parameters of the auteur theory isn’t the simple task it is for other directors. Despite enjoying rampant success in America, Polanski belongs to world of European cinematic modernism, a style he attempted to adapt to American classicism on more than one occasion, most notably in Chinatown. Polanski, like many of his characters, is something of an outsider—consistently at odds with established cultural and national norms. As such, his filmography tends to be elusive from a theoretical standpoint. As Paul Coates suggests in his essay on Cul-De-Sac (1966), Polanski may well belong to two separate definitions of auteurism: the kind that constitutes what Coates asserts is the modern era (where Polanski would find himself aligned with the likes of Antonioni, Godard and fellow Pole Jerzy Skolimowski) and the kind of auteur that is more akin to the original definition of the term, the “classic” one as postulated by Francois Truffaut, which concerned the journeyman who “prided himself on his professionalism,” and “removed the indiscretions of autobiography…by turning them into stories that seem no longer to apply to him,” whose films could be “analyzed in terms of their symbolic concealments.”

The original auteur theory, a set of guidelines and beliefs laid out by the Young Turks of Cahiers du Cinema that exemplified their collective critical mentality and has since become the primary principle of contemporary film studies, was rooted in stern appreciation for classic American filmmaking. That Polanski had little regard for classic style, and, by proxy, the nouvelle vague, is evident in his first three films: Knife in the Water [1962], Repulsion [1965] and most notably, Cul-De-Sac [1966]) are distinct products of the European modern art style that, coincidentally enough, the nouvelle vague helped birth when Godard and Rivette supplied their films with modernist techniques. 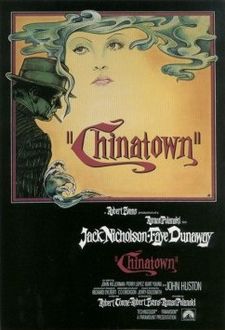 But things changed drastically during Polanski’s Hollywood period, which culminated with 1974’s Chinatown. Widely regarded as his masterwork and one of the great pieces of American cinema, Chinatown is Polanski’s stab at classic Hollywood filmmaking, co-opting film noir and following the techniques employed by the likes of Edward Dmytryk and Robert Siodmak. The film is the product of “classic” auteurship, with Polanski’s usual themes and motifs internalized rather than at the fore of his style, as they were in his early work. Chinatown, despite being the director’s most respected work, is the one most unlike his other films, which might explain its canonical reputation. Polanski’s best films—Cul-De-Sac, The Tenant, The Ninth Gate—are significantly more ornery in their moods and characterizations, whereas Chinatown has a more stuffy, rarefied air the director had all but renounced previously. (What is The Fearless Vampire Killers, Polanski’s proto slice of anti-comedy, if not a disavowal of conventional taste?) Obviously, Chinatown has something of a debauched worldview, and its denouement, significantly altered from Robert Towne’s original, is famous for being devoutly cynical, but Polanski’s prim presentation is a far cry from the adventurism and idiosyncratic flourishes of not only his European work, but also Rosemary’s Baby, whose invasive, nightmarish qualities override any conventional film aesthetics.

Chinatown, meanwhile, is merely conventional, as no less than Andrew Sarris posited when the film was released. In his writing, Sarris points out that Polanski never dealt with the confines of the classic studio system (thereby making him a “fringe benefit,” naturally). So it’s both interesting and apt to note Sarris’s negative opinion of Chinatown—Polanski’s most “classic” film and largely attributed as the last “studio film” ever made—as merely pretending to be infatuated with the past. And that’s partly true: the film’s revisionist nature doesn’t appear to show regard for classic style, but this isn’t a stylistic decision as much as it is the result of Polanski’s instincts getting the better of his intentions. He isn’t a classical director, yet he’s working in a classical mode, and the resultant tension gives the film an identity crisis; before Chinatown, one never needed to “search” for Polanski in his own work. Sarris suggests that the reason the film partially fails is because of its multiple authors (lumping screenwriter Robert Towne and star Jack Nicholson into a creative triumvirate alongside Polanski) and the reason it partially succeeds is because of Polanski’s insistence on changing the ending, something a “classic” director may have done. Regardless, the point stands that the film occupies a sort of staid middle ground one doesn’t expect from such a forthright, impassioned director.

Ultimately, to Sarris’s point, the film would have benefited from Polanski taking more liberties with Towne’s script, which is arduous and plodding at best. Its novelistic structure, though admirable in a formal sense, actively works against Polanski’s strengths as a filmmaker. His absurdist sense of humor, ability to amble between subjective and objective realism, and his sense of tone and atmosphere are all absent in Chinatown, given no room to prosper thanks to the script’s stranglehold. This rigid, even oppressive narrative framework forces the viewer down a predetermined path, making Chinatown a far different and less enjoyable viewing experience than the likes of Repulsion, Cul-De-Sac, and even The Ghost Writer, which improves upon Chinatown’s procedural design by taking abstract liberties with character and setting. The open-air playfulness of Cul-De-Sac makes it more democratic because Polanski uses that playfulness to refuse the film allegiance to a single character or theme. (Similar tactics are used in Rosemary’s Baby, as the mystery of the narrative unfolds with objective suspense.) While Polanski imbued the text of the film with any number of his trademark visual cues and thematic regularities, Chinatown’s inflexibility suggests a distinct lack of authorial intent on his behalf. Polanski’s attempt at a piece of classic cinema only proves that his strengths as a filmmaker lie in more modernist techniques.