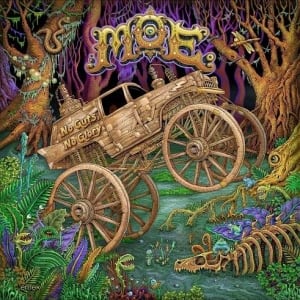 [xrr rating=2.0/5]For jam bands, songs become more mile markers than dedicated routes in only a few shows. For talents that thrive on improvisation, the album is often the aural equivalent of a rusty cage that surrounds a rare exotic animal. The five-piece behind progressive-rock/jam stalwarts moe. have never shied away from hitting the studios to record a full-length, but over their 20+ career the number of live albums the collective have released numbers nearly as many as studio takes. And that is not even counting the countless number of sets that fans have recorded and shared across the web and parking lots/campgrounds across the US. With 10 studio albums in the rear-view mirror, moe. wanted something more, so they enlisted the support of producer Dave Aron (Snoop Dogg, Tupac, U2, Prince) to assist in a professional rejuvenation. With those type of production credits, moe. was truly living up to the album’s title, No Guts, No Glory. Those production credits might worry some moe.rons, however, the subtle shift certainly isn’t a career-hindering move a la Chris Cornell’s Scream.

Long time fans will be both pleasantly surprised and comforted from the jump, as Al Schnier and Chuck Garvey go walking through the muddy waters during opening-single “Annihilation Blues.” Comprised by the same line-up for over 14 years, there is an ease in their ability to devastate a track’s core; after only 30 seconds a screeching guitar creeps through their bluesy guitar riffs. Although not typically a blues outfit, the aesthetic once again picks up during “Do or Die.”

Although dubbed “Same Old Story,” the cut highlights the incremental growth that arrived with Aron. Not truly rap, Garvey displays a rapid-paced delivery over the track’s underlying vibraphone solos, dueling guitar lines and keyboard stabs. Unlike progressive jam contemporaries that often stick to one vibe per album, the acoustic
“The Pines and the Apple Tree” and the follow-up funky jazz-fusion within “Billy Goat” attests to the genre-bending talents of the band. It’s a collective skill that only arrives from years of touring, and that up-and-coming jam bands like Papadosio and the Werks are still discovering.

Clocking in at over nine minutes, the group is given time to challenge themselves and the audience during “Billy Goat”; the same holds true on the primarily instrumental nine-plus minute “Silver Sun.” With anything less than five minutes to explore a song’s form, the result are feeble compared to the inspired power of these longer cuts. The true success of these tracks will only be established once moe. takes “Calyphornya” out on the road and experiments with extending the acoustic bridge that rushes from the two minute mark or build upon the scream-to-the-rafters melancholy of “White Lightning Turpentine.”

To steal another over-used cliché, it might be hard to teach an old dog new tricks, but at least Garvey and company continue to find means to work outside of formerly established artistic boundaries. They just need some more time to establish a seamless coalescence between old and new.