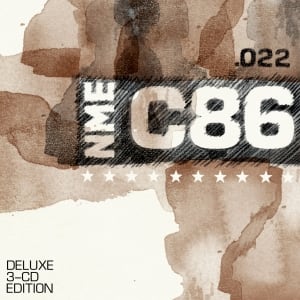 [xrr rating=4.25/5]When it was first issued as a cassette by British music paper NME, the C86 compilation presented such a succinct overview of mid-’80s UK indie that the cassette’s name quickly became shorthand for a generic designation of post-Smiths jangle pop. Opening with a spritely, 80-second b-side from Primal Scream before their electronica break-out, C86 showcased 22 artists, some like Primal Scream, Half Man Half Biscuit and the Mighty Lemon Drops went on to achieve a significant degree of notoriety, while others never matched the promise of being on this release. But even if C86 is a footnote, it remains a great document of a scene in flux, caught between the decline of post-punk’s first wave and alternative music’s commercial ascendancy in the ‘90s.

In this new deluxe reissue, the original 22-track album is supplemented by two extra CDs that add 50 songs, turning a cassette package with a newspaper into a miniature box set. What’s incredible about this swell of new material is how well it goes with the more pared-down first CD. Cynics could interpret that as a demonstration of how derivative the bands are of one another, but C86 covers a surprising sonic range, and its attitude hops from lighthearted pop to punk rage to sardonic satire.

There’s no denying that these bands wear their influences on their sleeves, however. The Mackenzies “Big Jim (There’s No Pubs in Heaven)” sounds like Gang of Four with a head injury, with off-key chords plucked at random until a danceable skronk emerges. The Railway Children’s “Darkness & Coulour” is what the Replacements’ “Unsatisfied” might have sounded like if it never took off from its acoustic opening, while the Shrubs’ “Bullfighter Blues” could pass for the early, nasty, arty version of PiL, back when they were still some kind of post-dub sui generis outfit and not an art-pop venture. Several big names that appear, like the aforementioned Primal Scream and, on this extended version, the Happy Mondays, have not yet arrived at the sound that would make them famous, and they blend in with the crowd more than they would just a few years down the line. On the other hand, the Jesus and Mary Chain were by the mid-’80s well-established, so they offer up a trademark piece of noise. Another band, Kilgore Trout sounds like a mix of hardcore punk and a brand of abrasive, layered noise that looks ahead to shoegaze.

But yes, most of these bands could be boiled down to the adjective “jangle,” but that’s not a bad thing. Hear a bunch of bands in succession latch onto a vaguely defined sound—the most obvious points of comparison being the Smiths’ more uptempo numbers and R.E.M. circa Reckoning—allows one to pick apart the subtle flourishes, but it also calls attention to what unifies the groups. A number of women-led bands crop up on the compilation (my favorite being Fuzzbox’s punky contribution to the original 22 tracks), but even the male acts have an androgynous sound, as if informed by the gender-bending of post-punk’s pop breakthrough but stripped back down to basics from the increasingly polished, synthetic sound of the chart-toppers.

The tripled content of the original album is the kind of overkill that alters the compilation’s context. No longer a well-curated introduction to a scene still producing artists and singles, C86 now reflects its own influence. This three-disc edition is more of a referendum than a consumer’s guide, an ouroboric celebration of the album’s own impact on the music it documented. And while 72 songs may be a lot to throw on a listener at once, the album recalls a Guided by Voices record or, closer to this set’s running time, 69 Love Songs: even if one tune’s a dud, it’ll be over in a flash. Post-punk revival has called attention to the UK’s rich ‘78-’84 period, and the rise of electronic music’s popularity has helped enshrine the rock-dance transition of Madchester, but C86 fills the missing years of the UK ‘80s underground with a set as sprawling as it is concise.