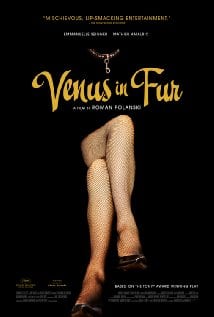 [xrr rating=3.0/5]Roman Polanski hasn’t been very nice to women both on and off the screen. Repulsion saw Catherine Deneuve’s character slowly go insane, Mia Farrow fell into the clutches of a coven of Satanists in Rosemary’s Baby, Nastassja Kinski saw her life fall apart in Tess and most ridiculously of all, Sydne Rome spent most of What? running around topless. In his latest film, Venus in Fur, Polanski directs what could be both a mea culpa and homage to his female muses, embodied by none other than his wife Emmanuelle Seigner.

Based entirely inside a Parisian theater (sans some dolly shots that show its exterior in the film’s beginning and end), Venus in Fur is an adaptation David Ives’ play of the same name. But rather than mount a straightforward cinematic version of a stage play (like he did with prior feature Carnage), Polanski uses the theater to portray a game of cat-and-mouse that occurs not only with the two characters in the film, but the characters they are portraying on the stage.

Mathieu Almaric (who looks a lot like a younger Polanski) plays Thomas, a writer-director who is closing up shop for the evening after a long day of disappointing auditions. He is adapting a play based on Leopold von Sacher-Masoch’s 1870 novella Venus in Furs, yet having trouble finding the right actress to play the lead, Vanda. The story, one that Thomas claims is very important to him, is about a mild-mannered man who loves a woman so much that he begs to become her slave. The 1870 book features some of the first instances of domination and sadomasochism in popular literature. In Polanski’s film, in from the night walks an actress who isn’t on the audition list, scantily dressed and calling herself Vanda (Seigner). While at first this Vanda seems empty-headed and unprepared, she slowly reveals that she hasn’t only memorized the play, but that she is exactly what Thomas has been looking for.

Polanski films Venus in Fur in what feels like real time. We watch the pair rehearse, argue and eventually mirror the roles of Severin and Vanda from Sacher-Masoch’s book. This isn’t the first time Polanski has made use of a confined space before (even Carnage took place almost exclusively in an apartment) and he masterfully uses his camera and the stage to create a talky film that is anything but boring.

Sexism and gender roles are the prime targets in Venus in Fur. When we first meet Thomas, he is grousing about how he finds most actresses idiotic. And while he claims that the source material for the play is very personal, he rebuffs Vanda’s accusations that he himself wants to be dominated, just like Severin in the novel. Vanda frequently tells Thomas that both he and his play are sexist, but the author claims innocence, hiding his cowardice behind the source material.

Though both actors are marvelous, Seigner is absolutely radiant, sexy and frightening. Her Vanda starts out like those bubbleheaded actresses the director bemoans at the film’s beginning, snapping gum and acting vacuous, but as the film progresses, she morphs into something prescient and terrifying. It isn’t long before the tables are turned and Vanda gets the upper hand. Halfway through the film, you will realize that Thomas is fucked, that he is no match for the type of woman that he secretly desires. Polanski may be in ultimate control as the director here, but since Seigner basically leaps off the screen, he too may become victim of his own cravings.