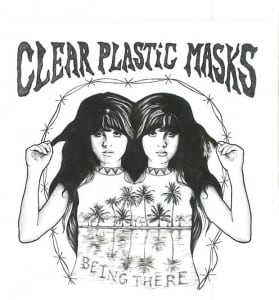 [xrr rating=3.75/5]Nashville via New York band Clear Plastic Masks delivers a rolicking dose of gut bucket Southern-tinged rock and dirty garage soul on their debut full length, Being There. This is a collection of songs played loose and raw, but the musical talent and tight dynamic of the four piece shines through the rougher edges.

“In Case You Forgot” opens the album with swelling organ, crunchy hits of guitar and drums and a duality of both self-deprecation and bluster that defines much of the record. Being There really hits its stride on third track “Baby Come On,” which highlights the dynamic tension between the band’s sweeter R&B crooning and their growling fuzzed-out rock. Frontman Andrew Katz starts with a gentler approach to his vocals, before unleashing a tortured yowl as the song builds towards its crescendo. Clear Plastic Masks is strongest when they make use of quieter moments and pauses, causing crashing rock sounds to be even more pronounced.

There’s certainly something retro and classic rock about CPM’s organic feel, yet they are not mired in the past. Katz does employ a bit of a Jagger swagger, and you can hear snippets of Southern rock royalty here and there, just as there are also brief hints of Stax-era soul. Most fuzzed out rock bands with any blues bent these days draw comparisons to Jack White or the Black Keys, and sure, there are bits of that here as well. The album was produced by Alabama Shakes producer Andrija Tokic, and there is definitely some of that same sweetly organic feel on Being There. But most of all, this is a rock album, and a damn good debut.

It is tempting to imagine this four-piece band being drunk most of the time, caked in the tour-weary grease and grime of many a dive bar. That image is only heightened by the party-fueled music video for “So Real” (originally released as a single under the more profane “So Fucking Real”). The frenetic tour diary finds the band drinking heavily, playing various venues, drinking more, arm wrestling, throwing up and drinking once again. You can almost taste the cigarettes. Whether or not they actually live up to the video’s image, Clear Plastic Masks makes lowdown, dirty, drunken music. And in this era of simpering synthesizers and sycophantic folk, it cuts through the white noise.

Being There shares its name with the cult classic 1979 Hal Ashby film about a simple-minded man who acts as a mirror for those around him and belies a deeper wisdom. The same could be said about the band. Their brand of rock is visceral, filthy even, but it is not dumb. You may hear other great bands reflected in their sound, but in the end they have their own flavor to offer. They formed in New York City before moving to Nashville and landing on Kings of Leon label Serpents & Snakes, and they bring some of that sneer and smarts of the big city. Katz writes subtly clever lyrics to match well-crafted songs about pain and love and lust. Pour yourself a drink or four, and enjoy.