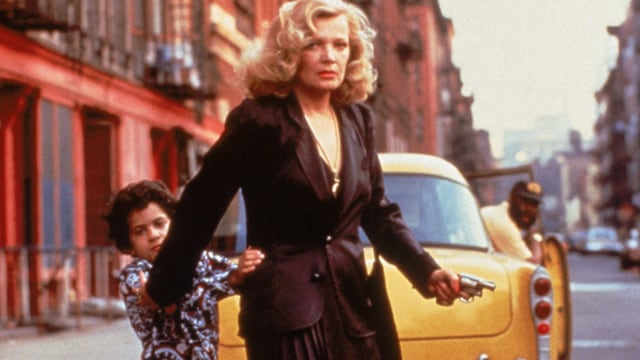 John Cassavetes’ fights with film studios and distributors are the stuff of legend. He was not a director who wanted to please people, and often his work depended on actively denying the audience what it wanted, something that, not surprisingly, drove the moneymakers crazy. After the emotionally draining conflicts during filming of Too Late Blues (1961) and even more difficult struggles during post-production on A Child is Waiting (1963), no one really thought Cassavetes would direct for a major studio again. But to finance his independent projects, he took a host of acting gigs and mostly uncredited script doctor and screenwriter jobs. When his wife and frequent collaborator Gena Rowlands was cast as the lead in the Columbia Pictures production of Gloria (1980), for which he wrote the screenplay, the studio asked him to direct, and he reluctantly agreed.

Rowlands’ Gloria is neighbor to Jack and Jeri Dawn (Buck Henry and Julie Carmen, respectively), a family in the midst of a crisis. Jack is an accountant for the mob and has decided to turn state’s evidence, putting his and his family’s life in danger. Jeri, knowing it’s too late for her and Jack to escape from the mob men already in the apartment building, tries to get Gloria to take her two children to safety. Gloria reluctantly agrees, though young teen Joan (Jessica Castillo) refuses to leave her family. Six-year-old Phil (John Adames) is finally coaxed away, becoming the sole survivor, as well as the bearer of the mob’s accounting book, given to him at the last moment by his father.

Cassavetes had always produced, through both writing and directing, what could be called hybrid work, films that were often direct attacks on Hollywood traditions, but he never fully eschewed them, either. Gloria is arguably the clearest example of this in Cassavetes’ oeuvre, especially in the opening scenes. Framed in mid shots with one Cassavetes close-up — for Gloria’s entrance, naturally — the film visually looks like an unadventurous clone of any other Hollywood action movie of the same era. But these dull visuals act as a blank canvas for the panic, paranoia and grief rippling through the Dawn family. Soon, the entire focus is on Jeri, the camera having slowly moved in closer to her as the inevitability of her family’s slaughter bears down. It’s a scene that ends with a moment between the two women, both strong and capable and realistic in a way almost no men in the film could possibly be.

He may have written the screenplay, but Cassavetes still disliked having to contend with so much violence in a film. Not only is a family massacred — though in a moment that is off screen but still terrifying – but the entire film is concerned with whether or not the mob will find and murder an innocent six-year-old boy, and his erstwhile guardian Gloria, too. The violence, however, is easy for an audience to distance itself from, as Gloria is remarkably self-referential, solidifying itself as pure fiction. When Gloria Swenson goes on the run with Phil, the media reports that her name is “styled after Gloria Swanson,” the silent screen legend. The Bronx Museum of the Arts is used as the location of a press conference in the film, and in every scene shot in a New York neighborhood, there are obvious audiences in the background, watching not just Gloria — who in many scenes stands out as the sole tall, white, blonde woman within camera range — but the movie crew as well. 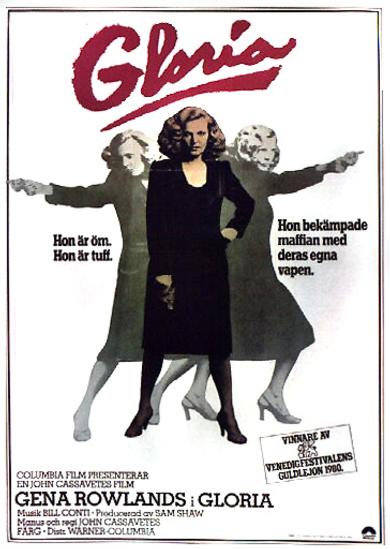 When Gloria takes Phil out of the apartment building and to a fabulous condo somewhere else in the city, it becomes clear she is a woman of means. But then the bombshell: She’s a gangster’s moll and friends with the very people trying to murder Phil. She doesn’t like kids, and Phil would be a very hard kid to like even for someone who was fond of children. Still, she gives up almost everything to get him out of harm’s way, all while knowing exactly what the mob would do to her and the kid if they were ever found.

Thus begins the incessant travel all over New York City, cabs and subways and buses to a dozen or more locations, the pair constantly moving but never getting anywhere. New York becomes their Limbo, the cops nowhere to be seen while mobsters lurk around every corner, on every bus, in every hotel. Gloria reluctantly took on this quest, one where she is forced to always change direction, modify plans and take crazy risks, just as Cassavetes reluctantly took on the job of directing Gloria, took risks with the script, all while maneuvering his way through studio politics.

Through it all, Gloria is tough. Phil doesn’t seem to particularly like Gloria, but he learns to respect her because of her strength. On the surface she’s a beautiful, 40-something moll, probably retired from what could euphemistically be called her profession, but she’s also terse and cold. While traveling all over, trying to find a friend here, get some money there, all the while trying to escape New York before the mob gets them, she enters into dozens of brief, everyday social interactions, and is rude at every turn. Everyone in her life is there for her, and if they can’t give her what she wants in the way she wants it, she lets them know.

But under that surface is a woman who has obviously lived her life making others happy; first, the gangsters, who have given her the freedom of two homes, lovely clothes, perfumes, jewelry and a hefty savings, and now the boy, who she gives up all her comforts for just to save. Gloria remains tough, even when caring for Phil, a surprising statement to make in a mainstream film. This character in any other film by any other director would likely transition from tough to caring, learning about life and love through the eyes of a child, and all that. Hollywood doesn’t think a woman can be both tough as nails and care for a child, not without sentimentality and some kind of Hallmark-card morality. Cassavetes disagreed, and so did Rowlands; his direction and writing coupled with her amazing control and performance crafted a female character who was nurturing without being weak, soft or disposable.

Gloria, not surprisingly, deals with Phil’s obnoxious macho posturing the same way she must have dealt with the grown men in her life: by reminding them that she and only she is the one in charge of herself and her life. John Adames had never acted before Cassavetes cast him as Phil, and it shows. At times, it adds to the character’s frustrating behavior, and gives a real sense of the kind of little monster a six-year-old would be after having his family murdered and having to go on the lam with a moll who doesn’t like him all that much. But Phil is sexually precocious in a really disturbing way that seems to be more than just a result of his father passing the torch of manhood on to him. There is a strong psychosexual component to his love-hate feelings for Gloria; that the mafia hitmen don’t consider Phil off limits when it comes to murder is indicative of how they regard manhood, too.

Though he once called the screenplay for Gloria “a thoughtless piece about gangsters,” Cassavetes used the film to take a direct swipe at the Hollywood action flick. In one of Gloria’s best scenes, Gloria finds herself on the subway, fighting hitmen. She gets the upper hand by pulling out her gun first, then jumps right into a rapid-fire unloading of clichés, a moment that is simultaneously exciting, funny and full of commentary on the inherent silliness and complete lack of reality in the Hollywood action movie. Moments later, safely in a hotel room, she wearily reassures Phil that they’re safe, she’s got a gun and everything is under control, and it is under control without question, no action movie catchphrases or outsized violent antics needed.

“I have a way of taking a simple piece of material and complicating it and making it noncommercial,” said Cassavetes in the seminal Cassavetes on Cassavetes. It’s true that, on most levels, Gloria is not a particularly commercial film. A female action hero lead was a hard sell in 1980, and much of the relationship between Gloria and Phil is pure Hollywood schmaltz, a thinly-veiled redemption story with a lead character that, at heart, was little more than a callback to the tough dames of 1930s pre-Codes. Thanks to Cassavetes and a tour-de-force performance by Rowlands, Gloria goes beyond its meager beginnings, becoming a striking exploration of emotional resilience, personal agency and the limits of one’s own humanity.