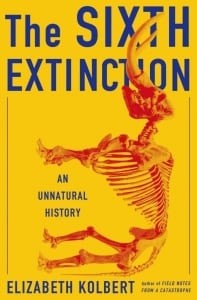 [xrr rating=3.5/5]The publishing industry is no stranger to apocalyptic non-fiction, frequently warning us of impending global scale catastrophes that demand immediate action – after you buy and read the book, of course. The pre-eminent classic of this dubious genre is Paul Ehrlich’s The Population Bomb, which predicted all kinds of calamities related to rapid human population growth, and proscribed fairly draconian solutions. Ehrlich’s apocalypse has not come to pass, and perhaps it never will.

But The Sixth Extinctionis quite different. Elizabeth Kolbert makes predictions that are as dire as they come. In a series of globe-trotting chapters, she details the many ruinations blighting our planet, the innumerable and seemingly unstoppable extinctions occurring around us, seen and unseen. Kolbert travels to South America, the coast of Italy and an island of coral rubble, all to bring us a terrifying prognosis: the rate of extinction on Earth today is occurring faster than it can even be catalogued. But unlike her disreputable peers, Kolbert has mountains of evidence to back it up. Instead of peering far into a murky future, she situates herself firmly in the present and grounds herself in the past. It is an apocalypse of the now variety.

Kolbert divides the book into chapters focusing on specific animals, some emblematic of past mass extinctions, others of our current environment. With a brief but thorough of the history of extinction as a scientific concept, Kolbert introduces both the relative newness of her subject, and the rupture to human thought it became, and in a sense remains.

The author jumps around the planet and through time, returning to figures like Charles Darwin and geologist Charles Lyell for guidance and critique. But Kolbert is not just interested in the recent past. She indulges in what a geology student would call deep history, narrating the (re)discovery of the asteroid that ended the Cretaceous Period as well as previous mass extinction events. Documenting the apparently random nature of past extinctions, she stresses the catastrophic nature of human life on Earth, at the mercy of asteroids or ice. Kolbert’s early chapters form a clear narrative, but her book becomes a catalog of destruction whose connective tissue is an actor much like the one writing this review. While Kolbert builds an argument, and a frighteningly strong one, it nevertheless falters in the book’s second half.

This is mirrored in the author’s inconsistent writing. Kolbert has a breezy style that can make the slow, laborious task of scientific research and discovery a blast to read. This readability helps push along her narrative, her writing at its strongest on the subject of scientific research. But she flags on standard journalistic observations like descriptions of people and places. There are clear echoes of classics like The Tree Where Man Was Born, but Kolbert lacks the density and verve of Matthiessen or the you-are-there urgency of Thubron. For the most part this does not hold the book back. In a chapter on invasive species and white nose, her narration effectively demonstrates the remarkable breadth of the destruction. Still, I skimmed descriptions of birds and their scientific names in the jungle. Kolbert writes better about ideas than about details.

In the end, the idea is more than enough. Environmental circles tend toward unfounded optimism or despairing pessimism, both of which are shortsighted. Not Kolbert. Casting her eyes toward the end of this century (few predictions go past 2100, because most species don’t have that long), she arrives at sadness and anger, acknowledging that humans will go to great lengths to save other species and mitigate their impact, even if in vain. The human urge to preserve, she argues, comes from the same place as our ability to destroy. “Were people simply heedless or selfish or violent,” Kolbert writes in the final chapter, “there wouldn’t be an Institute for Conservation Research, and there wouldn’t be a need for one.” Dark days are ahead, and though we can see it, that doesn’t mean we can stop it. Goddamn.