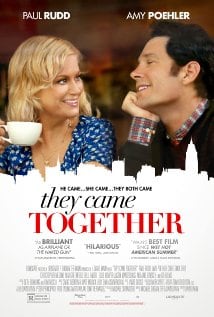 [xrr rating=3.0/5]They Came Together begins with the kind of smarmy self-awareness that is more self-serving than humorous. On a night out with another couple (Bill Hader and Ellie Kemper), Molly (Amy Poehler) and Joel (Paul Rudd) recount the story of how they got together. The pair preface their tale by defining themselves as typical rom-com characters: he “vaguely but non-threateningly Jewish,” she a hopeless klutz. For the first act or so of the film, most of the dialogue foregrounds generic tropes with a wink, like the thin connection between Molly as a local candy shop owner meeting Joel, high-ranking member of a candy conglomerate hell-bent on establishing a total monopoly.

The dramatic irony underlining the characters’ obliviousness toward their clichéd thoughts and lives is at its thickest in forced moments, such as when Joel cannot process the intentions of work rival Trevor (Michael Ian Black) when he spins a wrapped condom on his finger and asks about his girlfriend (Cobie Smulders). In that respect, it has much in common with other parodies like Walk Hard and this year’s 22 Jump Street. And like those other movies, They Came Together too often seems more satisfied to point out hackneyed tropes than to do anything to confront them, and the nearly exclusive reliance on broad lines of dialogue to get this point across lacks the mitigating visual wit that the other two films have.

Just as this tedious self-reflexivity threatens to make this 83-minute film feel twice as long, however, David Wain and co-writer Michael Showalter remember that they are funny. The forced, pointless calling out of cliché slowly gives way to Wain’s naturally off-kilter sense of humor. Christopher Meloni, as Joel’s boss, gets the first truly hilarious scene when he cannot get out of his superhero costume at a party, defecates in it, then leaves it in the bathroom and defends himself by insisting that someone else must have taken a dump in the suit. Elsewhere, a stuck-up waiter literally has a pole up his ass, so that when he turns he sends plates flying off tables.

It’s when these kinds of jokes start to shape the romantic comedy that the film finally distinguishes itself. Poehler, no stranger to non-sequiturs from her work on “Parks and Recreation,” handles the material best: just watch her face slacken with perfect disbelief when Molly discovers that Joel loves fiction books. “I’ve never met anyone else who likes fiction!” she enthuses so genuinely that the goofiness of the sentiment almost doesn’t register. Rudd, too, excels at playing up the aw-shucks banality of neutered movie “nice guys,” rendering Joel a good-natured dope who’s lovable in the sort of market-tested way that produces clumsy robots instead of real people.

Rudd and Poehler go a long way to sell the script when it hits its patches of dullness, but they clearly relish the odder moments to really cut loose. As a matter-of-fact parody of rom-coms, They Came Together does not really score points for purposefully being as mediocre as most films of the genre are by mistake. But when a falling-in-love montage collapses the fourth wall as Molly and Joel wind up in the recording booth where the song playing over the sequence is being recorded, the film actually breaks from the constrictive barriers it’s generally satisfied to point out and leaves them behind. A final twist threatens to really shake up the genre’s parameters of preordained love before everything resolves itself again, and that about sums up the film’s strengths and limitations. It may not be much better, on the whole, than the movies it spoofs, but with a cast this game, They Came Together makes for more pleasant viewing than most.