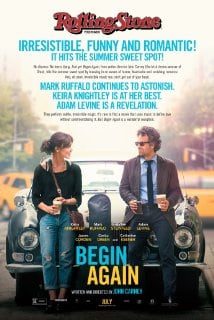 There is something bold about the beginning of Begin Again, John Carney’s star-studded music-oriented follow-up to independent breakthrough Once, which, unlike Begin Again, starred actual indie musicians as its musicians’ characters. Steve (James Corden) calls and eventually all but drags his friend Gretta (Keira Knightley) on stage to play one of her songs for the audience despite her protests. The acoustic guitar line she strums is nice, and her voice is pretty, but the first lyric about being alone on the subway is a bit of a red flag, and the song plods along without ever grabbing anybody. Maybe it is not bad, but to these ears, it was certainly dull. Carney does not judge the performance, though; the camera stays trained on Knightley as she performs and voices arise somewhat quietly from the crowd, but there is no heckling. When we are serviced with a long shot of the crowd, an older, bearded man (Mark Ruffalo) looks ecstatic. Is he crazy, or is the crowd? Is this supposed to pass for a good song in Begin Again? If it is, the movie might be in trouble.

Flashbacks tell us a bit about the two protagonists. Gretta has just lost her now-famous boyfriend and songwriting partner Dave (Adam Levine) to another woman who works for his new record label, and Ruffalo’s Dan is an alcoholic founder of a once-important but now-struggling label with a daughter (Hailee Steinfeld) who barely puts up with him and a wife (Catherine Keener) who prefers he stay away. When we see the opening scene from Dan’s point of view, we hear the song anew, with the drumbeat, piano fills, and strings transforming the song into something much better, depicting rather convincingly how a good producer or musician maps arrangements and melodies in his/her head. This is what is supposed to pass for a good song in Begin Again! Dan resolves to sign her and make an album with her, recorded in places all over New York City, partially because they lack the funds for a studio, and so both of them get another chance at music and romance.

For the most part, the songs, written by the members of the short-lived ‘90s group New Radicals and featuring contributions from Once star Glen Hansard, are quite good, which is important considering how heavily they feature in the film. Likewise, the use of older “pearls,” as Dan calls them, are appropriate and well-placed, and brief tips of the hat to Leonard Cohen and Randy Newman feel like organic, character-appropriate mentions rather than the contrived, lifestyle-selling in which characters have to prove that they “love the Smiths” to the audience as much as they do to their suitors. There is also a good scene in which the two walk around New York listening to each other’s music together that, for all its adorableness and heart-tugging, feels earned and unforced. The recording scenes are mostly delights, smartly punctuated with humor, if not prone to unnecessary bouts of sappiness now and again.

It’s clear that Carney understands music and its place in the lives of individuals and friend circles. His storytelling is much rougher. Even as Begin Again reveals itself to be about the rewards of not selling out by contrasting Dan/Gretta with Dave, the story does exactly that. The alcoholic estranged father, the recently hurt younger woman, the unlikely duo achieving redemption together, etc… We have all heard this one before. Things patch up as you expect, and even as the film cleverly works around particular romantic expectations, it is only offering small alterations on formula. Gretta, for all her humanity and despite the film’s many attempts to avoid forcing her to, serves as the manic pixie dream girl to Dan, and the clichés that riddle plot development are now so common and predictable that the inspiration they aim for is not even false, but gone entirely. Begin Again may make a few statements, particularly of the anti-corporate variety, but it does not tell you to pursue your dreams and persevere in a way that registers—but at least it isn’t pandering to its audience to recognize its hipness, either.

The film could end in any of three ways, and while Carney chooses the best of the lot, the journey ultimately speaks louder than the destination. The ending of Once worked largely because it rang true both to our world and the film’s. A chance meeting/romance was primarily about making music, and was relatively short-lived. Memorable as it may be, both characters had lives to live. Breakthrough and fame was never the goal. In Begin Again, those are the goals of at least one of the two protagonists, and the film itself aims to please despite (perhaps even with) the ending. The juxtaposition is incidental at best and confused at worst. But even as Carney fails to find a match between form and content, his songs come through loudest, and in that department, he does not disappoint.