September 26, 2020
Home Music Mastodon: Once More ‘Round the Sun 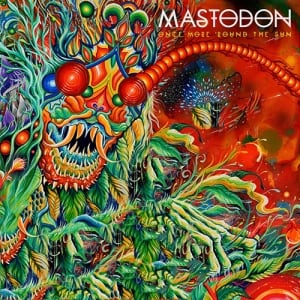 [xrr rating=3.5/5]As Mastodon has become increasingly popular outside of the metal community, the Atlanta four-piece has attracted increasing scrutiny from vocal fans who would prefer Mastodon stick to the sound of sludgy debut Remission. Having garnered as much mainstream success as a technically savvy hardcore metal act can reasonably hope for, Mastodon reacted to the popular acclaim they earned with Leviathan, Blood Mountain and Crack the Skye—all conceptual albums featuring increasingly proggy arrangements—by simplifying a bit on The Hunter and embracing a more accessible sound. Even a band as astonishingly talented as Mastodon can justify less lofty ambitions if it means defying expectations at the right time.

Once More ‘Round the Sun finds Mastodon operating in a similar mode; these new songs retain the fire and riff-worship of Mastodon’s progressive metal theatrics, but pack that style into shorter songs that focus on sharpened songwriting and melody. In the place of seismic sludge and psychedelic odysseys, Once favors hard-rock cuts with masterful, if overly simplistic refrains. Mastodon brought in Nick Raskulinecz (Foo Fighters, Deftones, Ghost) to produce, a logical choice to hone the quick hooks, intricate riffs and rapturous joy Once delivers at its best. At this point, Mastodon has earned the opportunity to have a little fun, and radio-friendly polish suits them even if such concise songwriting makes it a little more difficult to appreciate the band’s almost unrivaled abilities. While it’s fair to pine for the epic scale and similarly grand achievement of Mastodon’s four elemental works, Once More ‘Round the Sun succeeds as a playful reaction to mainstream success that remains cognizant of what makes those earlier albums so uniquely powerful.

Despite a slick presentation and contagious melodies all over the album, Once More ‘Round the Sun isn’t empty of emotional depth, touching on death, rebirth, time, and tragedy. Opener “Tread Lightly” fires guitar shrapnel off the line “Open your eyes/ Take a deep breath and return to life,” the moody “Chimes at Midnight” tells of dead heroes and “Aunt Lisa” (featuring Atlanta punk act The Coathangers) pays tribute to drummer Bränn Dailor’s late aunt in riotous fashion. Then again, bravado-filled rockers like “The Motherload” and “High Road” make no apologies for their simple aggression, and are all the better for it. The swampy guitar blasts on the verse of “High Road” are a perfect counterpoint to the refrain’s harmonized anthem.

The song-based approach Mastodon introduced on the The Hunter and favors on Once More ‘Round the Sun demands the band’s more progressive touches be rendered in smaller scale, making nimble execution an effective necessity. “Chimes at Midnight” rides the verse’s weaving arpeggio into a raging two-part refrain that charges ahead in a straightforward fashion; on “Halloween,” Dailor’s drumming is robust but notably restrained, a tempering force alongside the searching guitar-work on the song’s second-half; “Feast Your Eyes” channels its more complex guitar tangles into pockets that magnify the impact of more infrequent bursts of noodling.

While Once More ‘Round the Sun will likely be knocked by the same longtime fans that hated The Hunter, this new material is most successful when it references Mastodon’s more complex songwriting while prioritizing taut hard-rock drive. “Diamond in the Witch House” (featuring Scott Kelly of Neurosis) should be a knockout, as it sounds a lot like the highlights of past Mastodon records, but actually feels constrained by its lethargic tempo and ambling melody. Mastodon can create powerful conceptual sagas that span progressive rock, jazz structures and brutal metal songwriting, but their unique sound can also be applied successfully to less adventurous material. It’s only surprising that the band behind “Cut You Up With a Linoleum Knife” hasn’t done so more often.