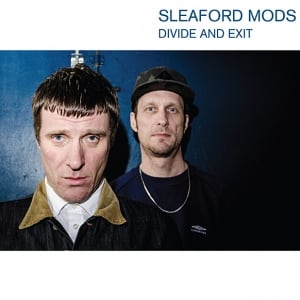 I laughed when I downloaded the promo for Divide and Exit. My iTunes classified it as “Blues.” I thought that genre stamp couldn’t have been further from the truth. But the more I listened the less confident I became in my original assertion. Sleaford Mods’ fuming music has been compared to the Fall’s minimalist post-punk and a more vitriolic version of the Streets. But at the heart of it, I realized, was blues. The “I fucking hate everyone around me blues,” “The government is made up of assholes blues” and the “I can’t afford the bus fare blues.” Maybe the accent isn’t the usual blues howl, nor the instrumentation classic guitar bars, but the blues of modern Brits propels Divide and Exit.

The blues, the Streets, the Fall: the truth is that Sleaford Mods sound like Sleaford Mods. They’ve got all of two gears; mad, and really fucking mad. Vocalist Jason Williamson is the catalyst for the flood of complaints on Divide and Exit. He’s perhaps the angriest man in the entire U.K. and he unloads his words in machine gun rants cased in pure nastiness. “The smell of piss is so strong it smells like decent bacon” he observes on “Tied up in Nottz.” He’s got his nose to the ground, smelling and seeing the shit daily life of the British working class. “It’s beautiful how the privileged still let ‘em in!” he shouts at his corporate oppressors, his voice covered in sarcasm and cigarette smoke.

Seems like not much has changed since London Calling; the streets are still on fire, people are still pissed and nothing’s affordable. I would have loved to hear Williamson musically raging in the Thatcher era, as those politician types really tick him off. On the ferocious “Middle Men” he describes how the titular bastards create a “metropolis of discontent.” Later he spits at the neighborhood association members who call him an “anarchist” because he won’t put his dog on a leash. “It will hurt the thing” he groans. Oddly though, his most brutal hit isn’t on the Prime Minister or some bureaucratic idiot. The decimating “You’re Brave” instead eviscerates a rich hipster. Williamson sneers as he hears “Matter of fact statements about he’s picking his kids up/ In two hours.” and responds with “Twat/ As if.” In retaliation, he shouts at the rich asshole that his friends are fake and compares them to prostitutes. Williamson also informs him, “I just wanked in your toilet!” This is where Williamson’s partner in crime Andrew Fearn has his finest moment. Fearn crafts rusty backing tracks that clank and grind like outdated machinery, and as Williamson changes “You’re brave” into “You’re just pissin’ in the flames,” Fearn quietly amps up a melancholy drone that perfectly fits the nihilism, along with a drum kick that sounds like an automatic weapon unloading.

Williamson and Fearn cast their nets widely, catching any hypocrisies and outrages that float their way. Williamson eyes passersby as Fearn lays down a punchy bass line on finale “Tweet Tweet Tweet.” “Cheer up you fucking bastard/ That’s all I heard him say” Williamson remembers, but he also recalls why he was so pissed off in the first place. “This is the human race…/ All you zombies tweet, tweet, tweet.” Over Fearn’s starkest and grainiest work Williamson offers: “Adjust this tie/ I hate this lie” on “Strike Force,” sounding like he’s seconds from hanging himself in the cubical. Williamson wagers that there’s a reason the world sucks so much, and it’s all due to “Liveable Shit.” “Same stink/It glides through the air/ By the time it’s hit ya, it’s been pacified by 10 yards of fresh air/ Liveable shit/ You put up with it.” Williamson sees it as something that wears down your soul. Day after day, year after year of liveable shit being stacked up can destroy a man. Sleaford Mods won’t take it lying down, but they’re not here for the uplift business. “I don’t expect the kids to sing along” spits Williamson on the vicious “A Little Ditty.” No, this isn’t music you’ll find hope in. You’ll get mad; and maybe you’ll get focused, go out and fight the “liveable shit blues.”