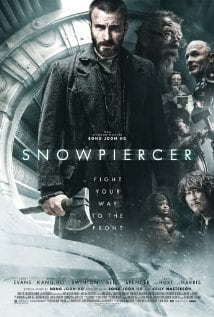 [xrr rating=4.25/5]If Jaws is the first summer “event” movie, then pardon the pun, Hollywood summer fare certainly has lost its bite since the ‘70s. Never would you see a child on a raft become a torrent of blood in any mainstream summer film, especially ones not rated R. That doesn’t mean modern blockbusters don’t trade in killing.

This concept of annihilation without the responsibility is a notion that makes us numb. As I sat through Man of Steel last summer, I’ve become so toughened against explosions in the cinema that the wide scale damage that took place in the movie simply bored me. People actually cheer when things explode.

Such programming makes it easier for to shrug when a remote control missile takes a village in Iraq. It at least allows us to comfortably create a good guys vs bad guys mentality. The big Hollywood studios are too afraid to show us carnage in a popcorn movie. That is why Snowpiercer, released by the Weinstein Company’s indie arm Radius, should make all the major studios ashamed for the escapist crap they peddle each and every summer.

The first English-language film by Korean director Bong Joon-ho, Snowpiercer, is a topical and terrifying action film that takes on climate change, socio-economic disparity and oppression. A measure to staunch global warming has frozen the planet, killing off all life. A small group of survivors ride aboard a train designed to withstand a catastrophe. Like a true social strata, the people who live at the front of train are few and possess all of the resources.

The central story in Snowpiercer concerns a revolution that sees the people in steerage grow tired of being repressed and attempt to take control of the train, car by car. These people live in squalor, fed only gelatinous protein blocks while being abused by guards armed with machine guns. As they move forward, Bong shows us the true human cost of an action film as each death is horrifyingly real and hard to watch.

In a well-publicized spat, the Weinsteins tried to convince Bong to cut more than 20 minutes out of the film. Even though Snowpiercer is punishing and does feel its length, it is no longer than the bloated comic book films we see each year. Cutting anything from this version of the film would be a crime.

It makes sense the Weinsteins wanted to make the film easier for American audiences to enjoy. Snowpiercer does not expect to quell audiences by blowing the shit out of things. It doesn’t compromise in its message, one that can be difficult for folks looking just for mindless entertainment to stomach. Like Cloud Atlas, Snowpiercer is chockfull of rich ideas, inventive scenes and some truly horrifying violence. Christopher Nolan’s Dark Knight trilogy earned many kudos for its turn towards the realistic in its violence. If Snowpiercer makes it way to your cinema, you will hard pressed to find a better film out there this summer.