January 27, 2021
Home Film The Pleasures of Being Out of Step 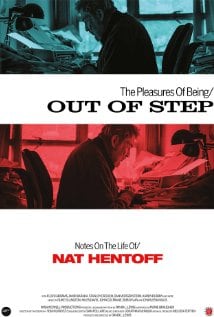 [xrr rating=3.0/5]This summer, moviegoers have their choice of two feature-length documentaries about notable critics. The art of criticism has become a different animal in the age of the internet, when everyone can voice their opinion but very few are able to make a living out of it. Recent documentaries about Roger Ebert, and in this case, Nat Hentoff, are documents not only of individual careers but of the cultural influence that prominent critics once had on their respective fields. Ebert, as seen in Life Itself, is obviously the more well-known of these documentary subjects, as reflects the nature of the writers’ subjects. Ebert wrote about a more popular medium, but Nat Hentoff is a major figure in his own right.

In music circles, Hentoff may be better known as a jazz critic than as a first amendment defender. The writer’s aesthetic and the political concerns have more in common than at first glance. As Hentoff appreciates the individual voices that come together to make a strong jazz ensemble, he defends the Bill of Rights as allowing for a nation of individual and often conflicting voices (his wife notes that he *loves* to argue) that make the country a varied whole.

Director David L. Lewis uses the usual talking head format, with generous samples of what will draw viewers uninterested in his politics. Lewis published a book based on the oral histories he assembled from the conversations with Hentoff that make up the documentary. While Hentoff is a provocative and articulate thinker, most viewers will prefer the movie to the companion text for one simple reason: jazz. The Pleasures of Being Out of Step includes generous footage of some of the jazz legends Hentoff covered, like Billie Holiday and Charles Mingus. Much of the footage will be familiar to jazzbos, but the film provides a window onto a generation that witnessed the development of jazz first hand, from the big band era to be-bop and free jazz.

As Ebert contributed to the medium he critiqued with screenplays for Russ Meyer’s great Beyond the Valley of the Dolls, Hentoff contributed to jazz with a series of classic albums he produced for the short-lived Candid label. Hentoff served as A&R man, and thanks to his long relationships with members of the jazz scene, he assembled some of the jazz world’s finest and shepherded them to some of their finest albums: Charles Mingus, Max Roach and Cecil Taylor, as well as bluesman Otis Spann, all made essential recordings for Candid Records.

Most intriguing for viewers drawn to Hentoff’s jazz side may be his surprising stand on abortion. Many of Hentoff’s views are left, but the writer, to the chagrin of many of his leftist supporters, takes a strong stance against any kind of killing, be it war, capital punishment or abortion. In music and in the political area, Hentoff walked to his own beat.