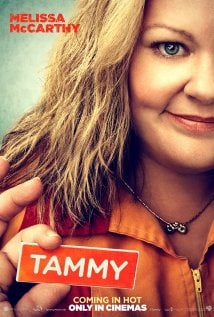 Much of the conversation around Melissa McCarthy is denigrating her, both the outright hostile comments regarding her appearance and the condescending concern from those purporting to stick up for her. Both voices conspire to frame her work since breaking out as an A-list comic in Bridesmaids as nothing more than one-note performances predicated upon her executing pratfalls (as if pratfalls were easy). Tammy arrives in theaters on a marketing campaign cynically built around this image, clearly aiming to do some of the same box office as hits like Identity Thief and The Heat. Yet the film quickly foregrounds its pathos, casting McCarthy’s usual physical comedy with a reflective quality that not only makes her weaker films look better in retrospect but suggests they were all of a whole.

The film was co-written by McCarthy and her husband Ben Falcone, who also directs and has a small role as the fast-food manager who fires McCarthy’s eponymous character at the top of the film. That termination is neither the first nor the last terrible thing that happens that day to Tammy, who got to work late after hitting a deer and who returns home to find her husband (Nat Faxon) in the midst of a romantic dinner with the neighbor (Toni Collette). The trailers sell Tammy as a bumbling loser, but this rapid onset of setbacks offers a context that does not explain Tammy’s aggressive behavior or her emotional stagnation but does offer a perspective from which to view the subsequent comedy.

Determined to get away from her hometown, Tammy sets out, forced to bring her grandmother Pearl (Susan Sarandon) along to take advantage of the woman’s savings and car. Sarandon, obviously, is no stranger to feminocentric road movies, and in a surprising twist, Pearl routinely steals focus in the film’s first half. Sarandon makes the most of her part, fondly recalling going out with Duane Allman and making eyes at an old lothario (Gary Cole) at a Louisville bar. There’s a glint of mischief in the actress’s eye I haven’t seen in her for years; Pearl is a functioning alcoholic, which comes to a head late in the film but also gives Sarandon an excuse to cut loose and go big with her facial expressions, and to nakedly lust after Cole’s Earl.

Pearl’s lascivious desires, not to mention Tammy’s, would ordinarily be fodder for laughs for their mere existence, given how American comedies so often consider women absurd for not fitting the specified age and measurement limits of attractiveness. The humor instead comes from seeing those dynamics flipped, of Pearl sending signals to Earl and Tammy taking the initiative with Earl’s son Bobby (Mark Duplass).

In general, the film is at its best when it gently curves around expectations like these. When Tammy decides to rob a fast food restaurant to raise money for her grandma’s bail, the sequence starts off with what already seems like stock McCarthy—placing a greasy food bag over her face as a mask, struggling to leap over the counter—but then it spirals into something truly funny by relying on more nuanced expressions of physical comedy, like her absent-mindedly pointing an exposed finger gun at a cashier, giving away that the bag over her other hand conceals nothing. Even the little slumps of her shoulders are delightful, her innate goofiness and warmth winning out over her show of force, and she even shares an odd bonding moment with the friendly cashier (Sarah Baker). McCarthy displays that affability throughout, even when trying to encourage the deer she struck to get up, and it’s a welcome change from the belligerent hard-ass roles that were quickly pigeonholing her.

Tammy suffers from a loose structure that can make its narrative motions confounding, and sometimes its emotional beats are prompted by characters who have too thin a connection to the protagonist to believably probe into her soul. Yet the film offers a refreshing corrective to the prematurely defined notions of what a Melissa McCarthy vehicle is, nominally playing to those preconceptions while subverting clichés. It certainly helps that almost every major character is played by a woman, and that all of them tweak rigidly typed roles. That’s true not only of McCarthy’s multifaceted woman-child and Sarandon’s pitiable but vivacious alcoholic but Kathy Bates as Pearl’s lesbian cousin and Sandra Oh as her girlfriend. Bates in particular steals the movie as a pyromaniac helping Tammy and Pearl hide from the law, half-regal as the overseer of a luxurious estate and half-anarchic as a pyromaniac accomplice. As funny as Bates’ Lenore is, however, the subtext of her behavior, the result of growing up in a homophobic community and carving out wealth and acceptance with tooth and nail, provides perhaps the most succinct summary of the ways that the film regularly upends expectations.