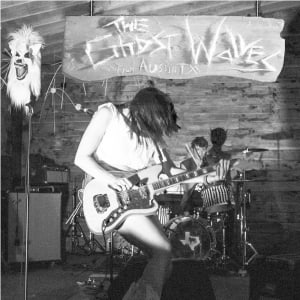 [xrr rating=3.5/5]The Ghost Wolves are yet another in a seemingly endless parade of two-piece rock outfits (will this be the most lasting legacy of the early 21st century pop music?), this one consisting of Carley Wolf on guitars and vocals, with Jonny Wolf bashing away energetically on drums. The duo rely less on the bluesy stomp of, say, The Black Keys, and mine a more raw garage-band vibe. More frenetic than Viva Voce, more girly than The Pack AD, The Ghost Wolves work hard to carve out a niche of their own.

In general, they succeed well enough to stay interesting. Carley is able to get a meaty, bass-heavy guitar tone, which goes a long way toward ameliorating what could be a tinny sonic palette. Jonny bashes the drums with vigor, and on any number of standout tracks, the pair hit a groove early on and milk it. The album goes by fast, with songs generally clocking in at the two-to-three-minute range, with only two tracks out of 13 topping four minutes. (They happen to be the best tunes. Coincidence? You decide.)

Those two standouts are “Gonna Live” and “Ride the Wolf,” the former being the follow-up to rather anemic opening track “Shotgun Pistol Grip.” “Gonna Live” benefits from a stomping beat and lyrics which, if not exactly deep, are nonetheless delivered with conviction. Carley’s muscular guitar line serves the song perfectly. A few songs later “Ride the Wolf” chugs away as the slowest tune on the entire record. It utilizes similar elements—throbbing rhythms, deliberate vocals, sweet slide guitar—with equal success.

The best tunes here are those that mine a midtempo vein; when the pair turn up the speed, as on the tedious “Attack Attack Attack” or the equally thin “Grave Dollas,” the cracks begin to show. Carley’s squeaky voice tends to grow even tinnier at high speeds, while the rattling snare and hi-hat of Jonny’s drums do nothing to add to the bottom end. The whole record is pleasantly lo-fi and scruffy, but tracks like these fall on the wrong side of amateurish.

For some listeners, Carley’s voice will be a deal-breaker. If Betty Boop fronted a badass garage band, she would sound much like this, a collections of squeals, hollers and purrs mixed in with occasional, y’know, singing. At times, her posing becomes tiresome—okay you’re cool, you’re a tough chick, you don’t take no shit from anybody, we get it—but when it works, as on anthemic album closer “Dangerous Moves,” it’s utterly convincing. At such times, Carley’s little-girl voice carries a sinister timbre to it, as if we’re hearing the wicked confessions of a child who should have no such stories to tell.

The Ghost Wolves aren’t exactly revolutionary, but they are an energetic rock outfit at a time when there seems to be less energy in rock every day. Fans of female vocalists and garage-variety guitar riffage should give a listen, although be warned: there’s no six-string wizardry on display.