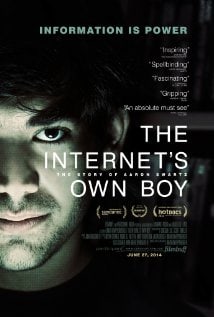 [xrr rating=3.5/5]What an amazing life Aaron Swartz lived. Brilliant, tragic and heroic (all adjectives that describe both the course of his life and Swartz’s personality), it seems inevitable that his will be remembered as one of the key lives in the history of the early 21st century (sadly, mainstream history books may ignore him, but documentarians and some future author of a new A People’s History of the United States won’t be able to). Swartz was maybe the most vital player and most eloquent voice for web freedom in the era that saw the internet come into its own as the dominant force in the world.

Or so says the excellent new doc about him, The Internet’s Own Boy, which is not titled idly; Swartz was at the front of the pack of the first generation of human beings to be exposed to the internet as children, and along with folks like Mark Zuckerberg (two years older than Swartz) he was one of the few who had the intelligence and opportunity to learn coding along with speaking, reading and writing. He understood the internet as something greater and more natural than what it was being used for and as a medium with infinitely more possibilities to effect positive change. He was so good that he made millions off the web before he was 25, after co-founding and co-selling the hugely successful website Reddit. Unlike his peers in web-brilliance (see Zuckerberg) he renounced the pursuit of obscene wealth to dedicate his life to making the web the tool for infinite, free knowledge that he saw it could be.

After laying out the trajectory of his early life as a net wunderkind—designing websites at five, helping to create the coding language RSS, speaking at web symposiums at 12—The Internet’s Own Boy focuses empathetically on Swartz’s influential, tumultuous and brief adult life. After Reddit , Swartz took aim at the federal government, which hordes the nation’s legal history on its databases and sells pieces of it to citizens for a profit, and at corporations like JSTOR, the company that runs a similar scam with the country’s scientific knowledge, hording it on private databases and charging for access. He successfully campaigned, with the help of Harvard’s Lawrence Lessig and Oregon’s Senator Ron Wyden (among others) to effect the famous internet blackout that got lawmakers to vote down the infamous SOPA (Stop Online Piracy Act) and soon after became a national authority on internet freedom who was frequently interviewed on the news. Apparently emboldened by his social victories, he took matters into his own hands with JSTOR, and started illegally downloading its scientific databases, which won him the attention of the FBI and the US Attorney’s office. The tragedy of his story, generally, is everything that happened next.

Boy is not groundbreaking as a documentary. It has an agenda—to tell Swartz’s story and in the process demi-deify him—and to that end it’s smoothly structured and peppered with the doc-requisite glossy charts and animations. Director Brian Knappenberger has a weakness for creating villains out of anyone who ever disagreed with Swartz, but in his defense he claims repeatedly that he reached out to and was rebuffed by Swartz’s Reddit partners and to the US Deputy Attorney who pursued and indicted the kid as a web criminal. But it doesn’t have to be groundbreaking with such a relevant subject. Swartz was an internet visionary—his frankly astounding accomplishments speak for themselves—and this doc makes a convincing case for his having been brought to an end by the powers that continue to profit off his medium.