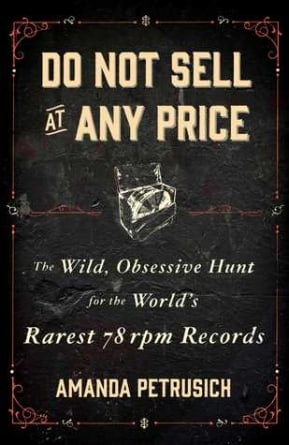 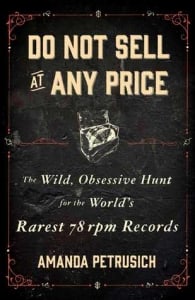 There are vinyl collectors, and then there are 78 collectors. Anyone can easily fashion himself a vinyl aficionado: a trip to a decent local record store or a few hours spent at eBay or Discogs are all that’s required to find “rare” vinyl. By contrast it takes an otherworldly level of dedication to collect those brittle slabs of shellac, and those (mostly) dudes who collect them are a breed unto themselves, as Amanda Petrusich shows in her entertaining and informative Do Not Sell at Any Price: The Wild, Obsessive Hunt for the World’s Rarest 78rpm Records. Indeed, only a 78 collector would be willing to pay nearly $40,000 for a highly sought-after 78 or learn how to scuba dive in order to troll the Milwaukee river for buried Paramount Records shellac (which the author did, though I suspect this was partly done to have a good story for the book).

Much like Brett Milano’s equally worthwhile Vinyl Junkies, Petrusich’s book is built around interviews and on-the-road-style field work with some of the most prominent 78 collectors (prominent among that crowd, anyway). What emerges is a depiction of the “typical” 78 collector: usually male and usually white, these collectors tend to view their role in collecting in noble terms, acting as both curators and preservationists – and, less amicably – competitors engaged in an epic struggle for domination – of pre-war blues, folk and gospel records. To an extent it’s all of the above, especially since in enough cases only a few copies of certain 78s were ever made. Petrusich’s skills as an interviewer are everywhere apparent as she gets into detailed, often philosophical discussions about the nature of collecting with big-time collectors like John Tefteller, Chris King and Joe Bussard, the last of whom has enough eccentricities to warrant his own reality show. It’s not always pretty but it’s amusing: almost on cue, many of collectors featured here get very peeved at the mention of a “common” 78 and think that the quality of music stagnated sometime around the Hoover administration.

Do Not Sell at Any Price also serves as a solid primer on the history of 78s and the companies who made them – most notably, the manner in which Paramount 78s “accidentally” became some of the most sought-after artifacts in the collecting world. In perhaps the book’s finest chapter, Petrusich provides an in-depth biography of Harry Smith and a brilliant discourse of how his highly influential Anthology of American Folk Music refined the nature of collecting and how we view music in general. In one chapter she manages to say more about the legacy of Smith’s “mix tape” than other authors have in a lifetime (Greil Marcus, cough cough). Also welcome are concise biographical sketches about those artists whose works get these collectors all hot and bothered; musicians like Charley Patton and Robert Johnson come alive in these pages, as the author places their songs in a cultural and biographical context that any fan of this music will appreciate. Likewise, Petrusich masterfully weaves her discussions with various collectors around a larger examination of these musicians’ lives, subtly suggesting that such details are sometimes lost in the rush to possess a 78 because of its scarcity.

Petrusich occasionally gets bogged down in pseudo-intellectual ruminations about WHAT IT ALL MEANS AND WHY WE COLLECT, going so far as to consult with medical experts who’ve written very long books suggesting that collecting represents everything from anti-social behavior to a mental disorder (my wife would say it’s both). The simple reason of “because it’s enjoyable” is never mentioned, but maybe I’m being a simpleton. Still, this is a minor complaint in what is otherwise a well-researched, well-written book about a unique subculture in the collecting field. 78 collectors are an exceedingly quirky bunch – a lesser author’s efforts would come across as slightly mocking – but Petrusich is able to reveal these traits and show that the role these collectors play as stewards of a time in American history in danger of being forgotten is important.