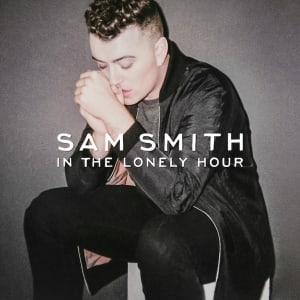 Sam Smith has the voice. From those first soaring chorus notes of “Latch” it was clear that he would be next in line for the greatness that both bolstered Adele and ruined Amy Winehouse. But In the Lonely Hour doesn’t properly answer whether or not Smith’s current chart domination signals future success.

Smith’s voice is near flawless; it’s the production side of In the Lonely Hour where things get uneven. Smith was catapulted to fame through the dance world with his show stopping performances on Disclosure and Naughty Boy tracks, but the powers that be seem determined to rein Smith into safe, top 40, territory. These saccharine songs soaked in bland guitar work and predictable arrangements make Smith’s strong presence fade. The bare bones guitar of “I’ve Told You Now” is sleep-inducing while “Like I Can” is obnoxious Billboard bait. Smith’s personal lyrics on “Lay Me Down” have fluffy backing vocals that make the sugary song wince-worthy, despite the its strangely great outro based around marching drums.

On a purely vocal level this is album of the year. Some are calling Smith a male Adele, but his power doesn’t come from violent low notes. Instead it’s Smith’s stunning high range. Smith has complete control over every component of his range. Single “Money on My Mind” has him switching from his chest voice, charmed with sweetness, to the overwhelming near squawk of the chorus. This fluttering quality makes Smith flexible; yes his best trick is still his stratospherically high notes, but he can be just as compelling in a lower register. Smith also brings an earnest honesty to the more personal tracks. “Leave Your Lover” is surprisingly frank and he sings the titular chorus as half a plea and half a coy command. Smith has cultivated a genial and humble persona and he seems like a genuinely kind 20 something who’s truly bewildered, but thankful, for his new found fame. When he sings, “I don’t have money on my mind/ I do it for the love” it seems completely true.

Smith flourishes when he’s not forced to make music destined to be played in dentist offices and shopping malls. The lovely, yet heartbreaking, “Good Thing” has Smith nearly whispering, “I had a dream I was mugged outside your house…./ In a panic you came running out/ For a moment you were sure I’d die on you/ For a moment I believed you loved me too.” The gospel tune “Stay with Me” is the most immediate hit for Smith’s pipes as a choir joins him on his impossibly high line during the chorus. The song opens with Smith singing “Yes it’s true I’m not good with a one night stand,” but he handles the track with grace. “Life Support” is understatedly grand and has Smith’s most phenomenal performance to date. “Money On My Mind” stands as the album’s most danceable track and a not so subtle reminder that Smith’s wheelhouse is still in more upbeat songs. In the Lonely Hour doesn’t quite have enough tracks like “Stay with Me” or “Good Thing” to be a smashing triumph, but the power of Smith’s voice can make formulaic slog tolerable. Disclosure, get this man some proper backing tracks.