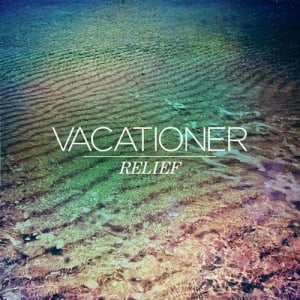 [xrr rating=2.0/5]There’s something to be said for music that challenges us, music that constantly pushes the limits and tests what’s possible, both sonically and thematically. So when Philadelphia-based Vacationer released its debut album, Gone, in 2012, it flew under the radar for many. The album, a shimmering collection of beat-heavy, pop-oriented gems, wasn’t a game changer. It didn’t challenge convention or reimagine a genre so much as build on an already solid foundation. The album didn’t stick out, but it was solid, which is probably why it was one of 2012’s best-kept secrets.

Now, with the release of the band’s sophomore effort, Relief, Vacationer has settled further into its own brand of dreamy, beat-laden new wave without any intention of ruffling feathers. Instead, the aptly titled album offers a reprieve of the convoluted and complex, showcasing 40-plus minutes of agreeable digitized pop. Relief is an instantly accessible and likeable effort thanks to its slather of hooks, drum-heavy textures and singer Kenny Vasoli’s tried-and-true tenor. With songs that brim and bubble with an upbeat, sunny-side-up outlook on arrangement and approach, its June release is well timed; it’s nothing if not a summer album.

That’s not to say there’s nothing complicated about Relief, because there is: nearly every song is packed with scads of sonically diverse beats, guitars, keyboards and samples. The amount of layers packed into the space of a single song should feel like overkill, but instead the sounds sit neatly, fitting together with themselves like puzzle pieces. “In the Grass” fuses a fluttering flute loop with a bass-driven melody and pulsating drums; “Stay” features a swarm of choir vocals backlit by harps, keyboards, beats and more. The album illustrates how much thought and time go into each song and how different ingredients can be thrown into the same cauldron to concoct something not only worthwhile but cohesive.

However, even though the band meshes together hordes of influences and instruments into such a short span, it would be more worthwhile to have seen Vacationer step out of its comfort zone and test the waters a bit. With two very similar albums now under its belt, it’s clear that the band is well versed in crafting music that can help tune out the rest of life’s noise, but it’s unclear whether that’s a sustainable model moving forward. How long until the approach becomes predictable or trite? After all, almost all of Relief feels like another installment of Gone rather than an extension or evolution of it. There’s nothing here that the debut didn’t already spell out in droves. Relief may avoid the sophomore slump by playing it safe, but it falls short of finding what else the band is truly capable of.

In any case, Vacationer has stuck to the old adage of “write what you know.” And while that formula worked well for the band’s first effort, its second LP, using the same tropes and motifs and sonic qualities, at times feels hackneyed and uninspired. On the album’s lead single, “The Wild Life,” the band sings “No point to making plans / The wild life is human nature / We’ve got to take our chance / Try our best to keep it working.” It might be time to start practicing what they preach—because without taking chances, a third release featuring more of the same likely won’t do anything for anyone. A big, bright, sunny album is all well and good for now, but summer is always over before you know it.