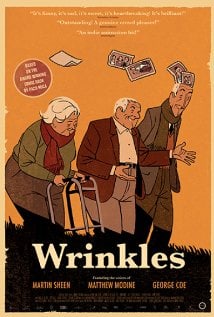 [xrr rating=3.75/5]Life sucks and then you die. Though the Spanish equivalent of that gloomy cliché is uttered by one of its central characters, animated nursing home dramedy Wrinkles doesn’t dwell on that message. Instead the film is about how, even in bleak circumstances such as running out the clock in a stimuli-starved rest home, there’s still living to be done. Based on Paco Roca’s award-winning graphic novel, Wrinkles doesn’t candy coat its subject matter, either. On their slow march to the grave, most of home’s residents are losing their marbles, but that doesn’t mean they can’t still play a few games with the ones they’ve got left.

Wrinkles tells a universal story of humanity, even as dignity is dwindling, and it does so through a friendship kindled between rest home roommates Emilio and Miguel. Suffering from the beginning stages of Alzheimer’s disease, Emilio (Tacho González) is just joining the home, relegated to the facility by his married son, who has decided he simply can’t care for his delusion-prone father anymore. What could have been a rocky transition is softened by his new roommate. Miguel (Álvaro Guevara) is gregarious and helpful, immediately rechristening Emilio as “Rockefeller” when he discovers the man formerly managed a bank. Miguel shows Emilio the ropes, while harmlessly bilking some of the home’s more absentminded residents out of a few Euros in the process.

Despite the home possessing a pleasant staff and reasonably comfortable accommodations, most of Emilio’s fellow residents make for a depressing crew. One woman stares out the window all day, believing herself to be an elegant young passenger aboard the Orient Express. Another woman hobbles around the hallways asking for directions to the nearest phone so she can call her sons to pick her up because she’s “all better now.” And then there’s the former radio DJ who’s incapable of independent speech and simply repeats the words he hears.

But Miguel, along with the affable Antonia (Mabel Rivera), help Emilio cope with his new situation, while also aiding him in masking the progression of his dementia from the doctors who would otherwise send him to the infirmary on the dreaded second floor. In the process, they break into the largely decorative swimming pool, smuggle in a puppy and even make one last ditch effort at a road trip, even though none of them can drive. But while Wrinkles highlights how there is joy to be found even in grim circumstances, darkness is allowed to creep in even for vigorous Miguel. A man who never married or had children so he could spend his life without attachments is now, in his autumn years, despondent enough at the loss of newly made elderly friends that he keeps a stash of pills tucked away in his drawer in the event that things “get too bad.”

Told through beautifully hand-drawn animation that serves as a fitting tribute to its source material, Wrinkles is a story that fearlessly confronts our inevitable loss of function. In a technological age when many people’s bodies outlive the soundness of their minds, the fog of dementia is not a subject to be ignored, even though life within the walls of a nursing home is something that most of us choose to look away from. Its plot may be slight, and this isn’t feel-good material, but Wrinkles is charming, sad, humorous, difficult and, for a few brief shining moments, an absolute joy. In other words, it’s much like life.