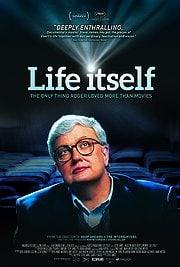 [xrr rating=4.0/5]Ask casual filmgoers to name one movie critic and it is likely that most would answer Roger Ebert. Pauline Kael may have had her disciples, but her reviews mainly reached the high-brow type that reads The New Yorker. Ebert, along with television partner and frequent antagonist Gene Siskel, turned film criticism into something that even the least informed fan could enjoy.

In Life Itself, Steve James’ documentary based on Ebert’s 2011 memoir, we get to see Ebert in his final days before he succumbed last year to an 11-year battle with cancer. In the final chapter of his memoir, Ebert writes, “I know it is coming, and I do not fear it, because I believe there is nothing on the other side of death to fear.” While Ebert’s book is a somewhat rambling look at his childhood, drinking haunts and Hollywood run-ins, James’ film instead tackles the sentiment in Ebert’s final chapter: here is a look at a man about to die who embraced life completely.

Ebert’s book suffered from poor pacing and nostalgic sentiment. But James avoids a paint-by-numbers look at the critic’s life, instead juxtaposing standard documentary fodder with revealing hospital scenes that graphically portray what life had become for Ebert, following a surgery that saw him lose his lower jaw. While many public figures would shy away from such a candid portrait, Ebert bemoaned that his hair had been combed too perfectly in that shocking Esquire cover taken after his jaw had been removed.

Both Ebert’s book and the film begin with the sentiment: “I was born inside the movie of my life.” Life Itself feels unconventional because its subject is so well aware of his celluloid life, in front of the television camera, in front of a flickering screen and as the subject of James’ documentary. It is even more fitting that the man crafting this film is the director of Hoop Dreams, the 1994 documentary that earned a wider audience thanks to Ebert’s praise. So we get scenes that Ebert most likely advocated for inclusion in the film, including a churning sequence of his G-tube being suctioned out.

Life Itself is loaded with famous people taking a moment to honor the well-loved critic. From Martin Scorsese to Werner Herzog, each is complimentary and yet mentions that Ebert was never one to temper praise. Scorsese remembers the hurt he felt when Ebert panned The Color of Money. However, Life Itself is anything but a hagiography. Ebert was a fallible human being with an oversized pride who suffered from alcoholism.

The most revealing section of the film deals with Ebert’s relationship with Siskel, who died in 1999. Both men were extremely competitive and often sparred off-camera. In some incredible unaired footage taken from “At the Movies,” the two men mercilessly pick away at each other, eventually resorting to profanity. However, in both its book and film form, Life Itself peels away the rivalry to show the immense respect Ebert held for Siskel, a respect that made it hurt even more when Siskel never revealed to Ebert that he was dying from brain cancer.

James fills the rest of film with choice pieces of Ebert’s life, from his childhood in Urbana, Illinois to his start in journalism to winning the Pulitzer Prize and covering the Cannes Film Festival. These sections, however, never feel as immediate or essential as the moments about his relationship with Siskel or his post-surgical struggles where he can no longer eat, drink nor speak.

It is the film’s heart wrenching final section that separates Life Itself from most documentaries. Upbeat and optimistic despite numerous setbacks, we can feel Ebert’s hopes diminish as he approaches his death. His final words come in pitiable, short emails to James, the words of a man on the precipice of dying. Even interviews with Ebert’s wife, Chaz, seem punctuated with the realization that she is losing her husband.

Ebert is well aware that James is creating his filmic requiem and that subtext adds an important dimension to the film. As Ebert wrote in the first chapter of his book, he believed that his entire life was a movie in which he was the star. After spending so many years watching films, Roger Ebert finally got to be in one. It is the performance of a lifetime.