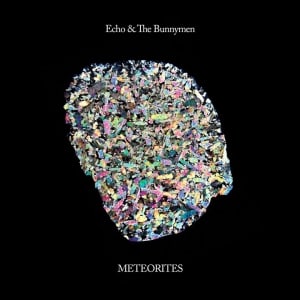 [xrr rating=3.0/5]Meteorites is the fifth modern Echo and the Bunnymen release featuring the band’s contemporary lineup, making the time between the Bunnymen’s first reunion record in 1997 and their debut, Crocodiles, almost the same as the time between that reunion and this 12th effort. While the band’s contemporary material doesn’t rival that of its ’80s heyday, vocalist Ian McCulloch and guitarist Will Sergeant have had a few years to adapt to recording without one of that decade’s great rhythm sections (Pete de Freitas passed in 1989 and Les Pattinson left the band after 1997’s Evergreen), capitalizing on the combination of McCulloch’s ageless vocals and Sergeant’s elegant guitar work.

The Bunnymen brought in producer Youth to shape this album’s sound, and his penchant for dramatic bursts of strings (see the Verve’s Urban Hymns) shows up throughout Meteorites, supplementing the heady atmosphere the Bunnymen already favored early in their career. This production style is a welcome complement to the style of the band’s earlier records—one that contrasts the lean, straightforward and disappointingly hollow style of the The Fountain (2009)—but it also lacks the dark corners and mysterious palette of songs like the “The Killing Moon” that define the band’s career. Nevertheless, Meteorites is frequently lush and lovely, making the most of McCulloch’s patient songcraft and yielding an expansive sound that maximizes the effect of the album’s grander moments.

Unfortunately, while there aren’t any overt missteps here, even the album’s most promising songs feel a bit like missed opportunities. The title track, “Is This A Breakdown” and “Constantinople” offer up enjoyable melodies but don’t really go anywhere, even if this last tune justifies a lyrically terrible refrain with plenty of deft touches from Sergeant, including a tense solo that easily steals the show. “Explosions” fares considerably better because its blushing melody is so much more dynamic than those on earlier tracks, but it also features a repetitive chorus that doesn’t stand up to the song’s wonderful verse. Still, “Lovers On The Run” is a grand mid-album example of McCulloch’s vocal charms, and “Market Town,” the longest song on the album by a few minutes, puts Sergeant’s skill on display as it drives onward.

Meteorites would be more impressive if it had been recorded by a less experienced band, or certainly one without a back catalog as strong as the Bunnymen’s, and that legacy also invites comparisons to those five classic ’80s records because it sounds just similar enough. While The Fountain ultimately didn’t work very well, it was at least an attempt at creative invention, and Meteorites may have benefited from similar risks. Even a few duds would have been worth hearing for new tracks that hearkened back to the widescreen tangles of songs like “Porcupine” or “Heaven Up Here.” Then again, it’s always a pleasant surprise to hear new material from the Bunnymen, and Meteorites is a consistently pleasant listen from a band that really has nothing to prove.