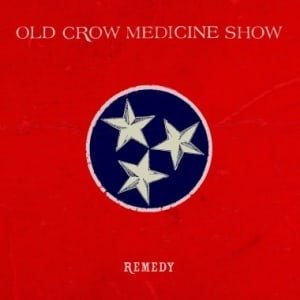 [xrr rating=3.25/5]Many folk and Americana releases of the last several years have taken themselves very seriously, with countless morose and plaintive takes on old-time music. But every genre needs a little comedic relief, a bit of feel good, and it was a smart idea for Old Crow Medicine Show to put that vibe right out front by kicking off their solid new album with the jaunty number “Brushy Mountain Conjugal Trailer.” The fun continues on track two, “8 Dogs 8 Banjos”. This is clapping and thigh-slapping music. It’s hard not to smile and at least bounce around if not get up and dance. “Corn whisky, dirt weed / Corn whisky, dirt weed / Tell me what you need in the whole wide world/ Tell me what you need my pretty little girl / Corn whisky, dirt weed.” This shout-along tune brings to mind a timeless, wild, drunken scene of rural Americans in celebration.

OCMS formed in 1998, and have taken their time releasing albums. Remedy is their fifth official studio release, though they have some out-of-print EPs and a live album. In technical terms, they have only gotten better with time, with faster banjo picking, prettier fiddle and tighter harmonies. But it is when they harken back to their looser, almost punk energy-fueled faster numbers of their early days that the group really shines again.

Many are familiar with this band for their biggest (arguably only) hit “Wagon Wheel,” which has become the modern go-to campfire sing-along song. But Old Crow Medicine Show sets out to demonstrate they are not a one trick pony. Is there anything on Remedy that will prove as infectiously popular as the now platinum-certified “Wagon Wheel”? Only time will tell, but for many bands that sort of magic lightning only strikes once. There is little new ground broken here, and this album hews pretty closely to the string band formula they’ve set. But it’s a winner, so why mess with it?

But this is not all light-hearted fun; the album includes some strong ballads as well, such as “Sweet Amarillo”. This is one of the best lyrics-driven Old Crow songs in years. Perhaps it comes as no surprise, then, that Bob Dylan penned the original sketch for this song as well, giving it to the band to complete 10 years after they took his unfinished “Wagon Wheel” for a ride to stardom. It was just 26 seconds, a chorus really, that Dylan offered to the band to see what they might do this time around. They’ve turned it into a forlorn love song, one that swings and works quite well.

Remedy isn’t made up exclusively of winners. “Dearly Departed Friend,” for example, drags. It is cloying and almost pandering in its transparent appeal to tug at the heartstrings. This song sounds much more like a straight mainstream country tune sung at a flag-draped gravesite. Perhaps the group included it in anticipation of attracting more of that country crowd, as Darius Rucker covered “Wagon Wheel” last year making it a Top 40 hit. While the song may indeed be a truly personal story of a good friend lost, it doesn’t really work here. The imagery is weak, and the album’s momentum stalls.

Other stories, however, are much stronger. “Doc’s Day” seems to recall the tale of OCMS’s big break, when they were discovered by Doc Watson himself while busking on a street corner in 2000. Liking what he heard, Watson invited the group to play Merlefest that year and the rest is history. In this song’s version of events, the group is playing on a street corner and an unnamed hillbilly approaches them to give some advice, “If you wanna rock, listen to Doc / If you want the girls, better pick like Merle / ‘Cause them high country blues still blow all the women away / So beat on the corner with your flat top box / Pick on the banjo, boys don’t stop / Give me old time music, lord make it hot / Just like it was in Doc’s day.” It’s a fun name-dropping tune, paying homage to some of their greatest influences and codifying into myth their own personal creation story as well.

Old Crow Medicine Show is credited with a major resurgence in old-time string music, especially among a younger generation. They are said to have paved the way for the success of bands like Mumford and Sons and even, arguably, the Avett Brothers. But of course, they owe much to the long tradition of American string music, bluegrass and alt-country that came before them (not to mention Bob Dylan and his half-finished songs).

Remedy is packed with much of that same jubilant OCMS energy that has already brought them much recognition. Bereft of synthesizers and electronics, the album might not sound like the future, but it surely is a good cure for what ails ya. Enjoy a deep drink of this classic Americana sound and let your troubles melt away.