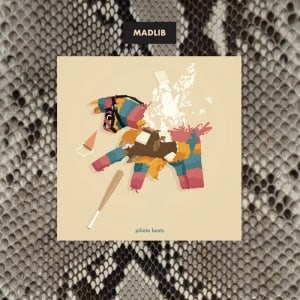 [xrr rating=4.0/5]For those of us not frothing at the mouth over Yeezus, the hip-hop album of 2013 was the lunatic combination of El-P and Killer Mike on Run the Jewels. The chemistry between the two radically different MCs was undeniable, in part because they were trying to impress each other. Mike, fresh off of the mammoth (and El-P produced) R.A.P. Music, hyped his producer’s talents throughout. On menacing banger “Banana Clipper,” Mike proclaimed “Producer gave me a beat, said ‘It’s the beat of the year’/ I said ‘El-P didn’t do it, so get the fuck out of here!’” Run the Jewels 2 is supposed to come out later this year and there’s no doubt that Mike will still be repping El-P’s beat making skills. One tiny problem though: in 2014 he’ll be going up against Madlib. And, to put it mildly, El will have a tough time making a better set of beats than Piñata.

Madlib’s work on Madvillainy was genre-defining for the world of abstract hip-hop. He could have hung his headphones up right after and his legend would still be cemented. But thankfully, Madlib gets bored too easily to rest on his laurels. He’s taken on insane personas like the pitch-shifted rapper/ALF alien look-alike Quasimoto and released critically acclaimed projects like The Unseen. Last year he threw us a bone with Yessir Whatever, a collection of rarities and unused beats that made other producers sweat, “These are the throwaways?! What?!” And because Madlib apparently doesn’t need trivial mortal things like sleep or food, he also produced the stunning Piñata with Freddie Gibbs.

There is a rather large, Gibbs-shaped hole on Piñata Beats. Gibbs could have thrown down his verses over half-baked trap beats and they still would have been some of the best of the year and Madlib’s production is genius, but they combined into something phenomenal. Without Gibbs, his work still stands as a godsend for rappers looking for free beats. High fidelity soul has always been Madlib’s MO and these are some of his freshest cuts. The piercingly gorgeous string sample of “Deeper” flawlessly fades into the love sick vocals of “Deep, for your love.” The Manhattans’ biting “Shame” has a silky smooth change-up into the album’s most sensuous beat, though it’s a shame that quickly rising soul singer BJ the Chicago Kid’s chorus was cut. When first listening to Piñata, it took me a long while to realize that BJ’s clear crooning wasn’t just some delectable sample Madlib had found while digging in the crates. Thankfully, Piñata Beats does keep the small interludes of film sound bites, like the intro to the gangsta anthem “Thuggin’”: “Somebody warn the west, nigga ain’t runnin’ no more.”

Madlib splits his beats into the laid back and the hard shit. In the first category are the easy grooves, built for summer time cruising like the kush ode “High” and the snappy “Harold’s.” Add in the West Coast/East Coast duo of “Lakers” and “Knicks” that are ear candy and it’s clear that Madlib has control over the good vibe side of instrumentals. And yet, his tremendous range lets him produce some of the year’s hardest beats. “Bomb” is all sleek menace, “Shitsville” has violins on speed, and “Thuggin’” is equal parts swagger and threat. “Uno” mixes bumping and gritty bass with triumphant horns that sound like a sonic victory lap. There’s also the mesmerizing and spiraling harpsichord line on the title track, backed by sitar and a hard hitting organ/drum kit combo. Make no mistake; this is the soundtrack of a master in his element. You better be bringing your best, El.