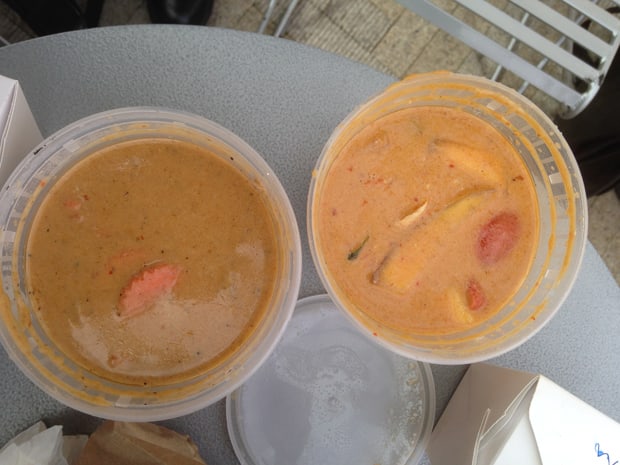 The (white) elephant in the room for this inexpensive cart is its elephantine speed. Simply put, this cart bucks the 30-minute trend and was very slow to serve our food. Part of the reason one goes to a food cart is because the service is usually pretty quick and the food is of decent quality and usually inexpensive. The last two parts of this equation are the case, but the overarching lack of haste ruined this place for us, though.

Here are the upshots: for $5 you get a quart of curry and a to-go Chinese container of white rice. We had the mango curry with chicken, medium, which was better than the Mussaman curry with pork, hot (what I have dubbed ‘infidel curry’ since ‘Mussaman’ is Thai for Muslim). The curries were solid, filling and flavorful. We also ordered the salad rolls for $3, but they were out of them.

They have a wide range of spice to offer, as well: from mild, medium and hot to extra hot, really hot and OMG as options. For those who like heat and digestive fire, this would probably be a good option.

The mango curry had freshly sliced mango in it (I spotted the window attendant peeling and cutting mango), the chicken was good, and the overall complexity of the dish was above average. I was surprised, though, that it was a coconut milk-based curry, as most tend to be a stir fry. The Mussaman’s potatoes were almost crunchy, though, and the carrots were mediocre; it lacked any peanuts. It wasn’t much hotter than the mango curry, leaving room for trying out really hot in my book. To the eye, they looked pretty much the same, which was unsettling at first, considering our expectations.

Time: 45 minutes. From the time we ordered ‘til when we got our food, 28 minutes had elapsed. While it was a nice, sunny day, rare for Portland in April, the cart wasn’t extraordinarily busy. And my limited Thai revealed to me that many people had ordered Mussaman curry as well, so they could have, theoretically, batched the job. But they didn’t, and people who ordered after us got served before us. My dining companion didn’t have time to finish his meal, instead he was forced to scarf quickly and leave quite a bit behind due to having to get back to work. This is sad. All of the negative reviews on Yelp lament this same fact… since 2009. Ouch.

Gut check at 3pm: Great, although I ate a little extra. For $5, it is hard to complain, but you essentially pay for it in time. The quality of the food was delicious, almost making it worth the wait. Almost.

Sustainability-1 No GoBox!, served in plastic with plastic forks and plastic spoons. And plastic spoons do not perform well when you’re scooping out essentially soups into a rice. This was a disappointing factor as well.

Fear Factor-2 $5 Thai food sketches some out. I mean, what sort of corners are they cutting? Other than that, though, there was pretty much a typical array of Thai dishes available. While my dining companion didn’t like the pork as much as the chicken, it tasted fine to me. I don’t think I’m going to get sick, unless those potatoes were uncooked AND green…

Staying Power-4 Apparently, they had a price increase to $6 about a year ago and they have since gone back. It probably cut their competitive advantage. You go here because it is cheap, not because it is fast. At least they realize that. If they hadn’t been around since 2009, I’d guess that they’d have less of a staying power, because, personally, we’re not likely to go back. Our time is worth more than the one dollar difference between it and other places.

Creativity-1 Standard Thai offerings and absent salad rolls. So, no bonuses here. It is nice they offer pumpkin and mango curries, but they’re not exactly creative dishes by any means. 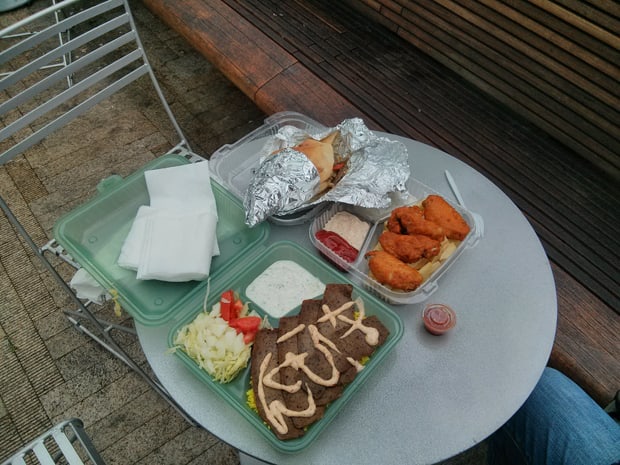 Saaj Baghdad serves Iraqi food consisting of shawarma, gyros, tzatziki, falafel and, for some reason, chicken wings and french fries as well as a smattering of other American-ish food. Sandwiches and plates range from $5 – 8. If I don’t sound excited, it’s because I’m not.

We rolled up to the cart on an unseasonably cool May day, ordered a lamb shawarma ($8), a gyros platter with rice($6) and chicken wings and frise [sic] for $6. Their menu was complex and confused–two were employed, each with conflicting enumerations, and we weren’t sure what we were going to get nor how much anything was. Our meal total was $20.

The six, thin slabs of gyros meat were served on neon yellow rice–reminding me of the worst microwaved paella I got in a tourist area of Barcelona–obviously not colored from saffron as the color is meant to suggest. The shawarma was by far the star of the show, boasting grilled vegetables and tender lamb in a triangular pocket bread that was almost reminiscent of Delicios’s hot dog crust. We feel that if we simply would have just ordered two shawarmas, our opinion of this place would be much better. The four wings were encrusted in corporate spices and accompanied with listless shoestring french fries, ketchup, tzatziki and a thousand-island-like dipping sauce. They were slightly cold in the middle, obviously being reheated from a plastic bag bought in bulk and frozen for maybe a year.

Time: 30 minutes. It took us 10 minutes to get our order. The guy in the cart made everything on his own and in fairly quick succession. We walked to our dining spot and watched the new skyscraper being built as we ate.

Sustainability-1 They use GoBox!, but everything else reeked of factory farms. The lettuce was even iceberg and unappetizing. The tzatziki had no real zing to it… I felt that Costco may have been another supplier. The plastic forks were an unwelcome accompaniment to the meal as well.

Fear Factor-3 Middle Eastern food isn’t scary. But I was a bit afraid of slightly-chilly chicken wings in the middle as well as frozen goth-knows-where-it-comes-from meat. I’m not looking for E. Coli, but this is the sort of outlet where the overall American industrial food supply will expose me to it.

Staying Power-1 Limp fries and meh food aren’t exciting. While the shawarma was passable, just about everything we had was simply unimpressive. There’s no reason that this place will grow or be destined for greatness.

Creativity-1 The other research I did on this place was excited about the bread. That’s right. The bread is exciting. Sorry, but if triangular bread is the most exciting thing about the cart, there are no points for creativity here. Reheating frozen food is the thing that TV dinners are made of and not the reason I go out to eat. 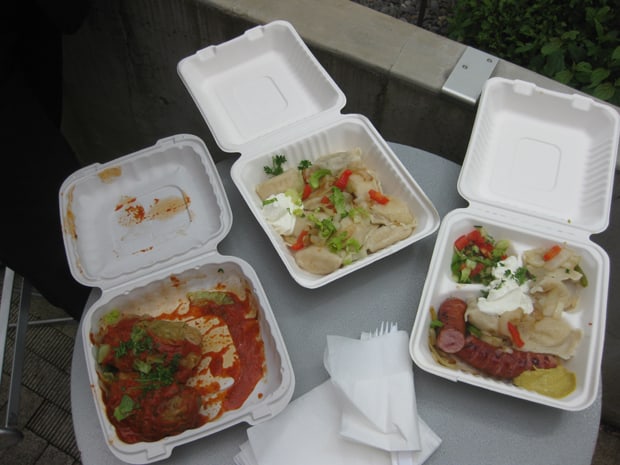 Polish eats that were probably on par with the Transylvanian cart. This food was immensely flavorful and we were shocked at how incredibly good it was. Usually, Polish food excites no one: sauerkraut, sausage, potato pierogies–yawn, right? Wrong. The food here is hand-made and expertly done: the pierogies were creamy in texture–the mashed potatoes perfected as a filling. The sausage was extraordinarily tasty, packed with savory spices. The accompaniments, from the sour cream to the veggies and grilled onions were all very fresh, which is more than can be said for a majority of the carts we’ve visited.

They offer things like goulash and beef, schnitzels, pierogies, cabbage rolls, stews and blintzes for dessert. Veegetarians need not fret, as well: it’s not all beef and potato.
To stay under our $20 ceiling, we weren’t able to partake in the blintzes, which we’re still regretting, but we were able to get a kielbasa plate, an order of pierogies and some of the best seasoned-beef cabbage rolls we’ve ever put in our mouths for $19.50. I’m usually no fan of beef, but I had no issues here because everything was so good. Those cabbage rolls were delicate, yet not messy. And if I could only explain the texture of the cabbage–words do not do it justice. Let’s just say: soft, functional and strong.

This cart is in our top two thus far.

Time: 35 minutes. It took about 18 minutes to get our order. But it was so good once we got it, we chowed down and still finished in a reasonable amount of time.

Gut check at 3pm: No issues; very happy. This food was really high quality for its price. Prices ranged from $4-8 for just about everything, and you had options to scale your pierogi orders, as well. This was all very affordable, and one of the plates would have been enough for a reasonable person’s lunch.

Sustainability-2 They use GoBox!, but other than that, I saw no inkling of sustainable practices. Can’t win them all.

Fear Factor-2 Polish food isn’t scary. The danger here is overlooking a place because German/Russian food seems, for whatever reason, not exotic enough to warrant attention. Do not fall into this trap as I did. Go here. Fearlessly.

Staying Power-5 This cart has been around for several years. I now understand why. I don’t think they’re going anywhere. Unless a Russian and German cart set up on opposite sides of it (sorry, I’ve been reading too much world war history lately).

Creativity-3 You know, it’s more creative than you think… to make pillowy pierogies at that level, likely by hand, I have to toss in some points here. And cabbage rolls so tasty and expertly crafted… yeah, you’re getting bonus points here.