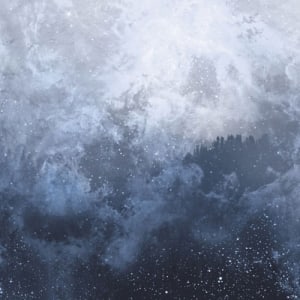 [xrr rating=3.75/5]American metal outfit Wolves in the Throne Room call Celestite a companion piece to their 2011 stunner Celestial Lineage, though it’s hard to identify exactly what links their two wildly disparate styles. If the sounds and ideas at the heart of Celestial Lineage are the same ones that define their new album, they have been warped, reinterpreted and transformed beyond recognition, because this new project initially appears to share little with the band’s previous work. Wolves in the Throne Room’s early metal records invoke ambient music, but Celestite does the opposite, applying black metal’s cavernous scope and ominous tones to ambient music’s defining characteristics. Celestite will not be confused with even the most tortuously slow metal records. Instead of bass and drums, there are crushing analog synths, combined with horns and woodwinds that further darken the album’s dense instrumental soundscapes.

This might seem like wholly new territory for these black metal proprietors from the Pacific Northwest, a locale that has become one of the nation’s premier genre incubators. But Celestite is not as much of a stylistic leap as it reads on paper. The band’s early albums featured the occasional lengthy pastoral segment that expands into weighty metal—such as the shimmering Celestial Lineage track “Woodland Cathedral,” a song that wouldn’t be out of place among these amorphous compositions. The new record creates a similarly dramatic experience with its own set of tools. The final half of “Turning Ever Towards the Sun” pulses like an elevated heartbeat, each thump registering with seismic force as the song’s hazy tones float above it. On the next track, “Initiation at Neudeg Alm,” cuts of buzzing synth collide with inky, overdriven guitar.

A few of these tracks are certainly heavy, but that gravity comes from thick layers of churning synths and droning sustain instead of the brittle guitar figures that define the sound of the band’s earlier work. Shorter pieces like “Bridge of Leaves” and “Initiation at Neudeg Alm” combine Sunn O))) style drone with hazy Tangerine Dream synth textures, frequently sounding like a caustic hybrid of Eno, Loscil and Pink Floyd, but their ominous underlying structure could be built up into a more traditional metal saga. Furthermore, Wolves In The Throne Room have never relied much on vocals, focusing more intently on sophisticated black metal instrumentals, so their absence doesn’t even register until a few minutes in. That’s a testament to how successful Celestite is at applying a metal band’s creative mindset in a completely unexpected way. The 15-minute standout “Celestite Mirror” is an engrossing work all on its own, gliding smoothly between widescreen synth figures and gut-wrenching blasts, finally laying flute over the top. Like the album as a whole, it feels like a totally unexpected but perfectly logical extension of the duo’s compositional voice.